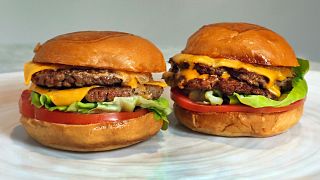 There are three broad kinds of meat substitute, but microbial 'meat' may have the environmental edge.   -   Copyright  AP Photo/Richard Drew
By Lottie Limb  •  Updated: 05/05/2022

Replacing a fifth of the beef people eat with a fungi-based alternative by 2050 could cut deforestation by as much as 50 per cent, new analysis finds.

The links between the steak on your plate and razed forests in the Amazon are well known at this point. Food systems are behind a third of global greenhouse gas emissions, with cattle being the single largest source.

Convincing the most committed carnivores to change their habits is another matter. But ‘microbial protein’ - a meat alternative produced in fermentation tanks - has a persuasive taste and texture.

Now researchers at the Potsdam Institute for Climate Impact Research (PIK) in Germany have, for the first time ever, projected the development of this substitute into the future, assessing its potential environmental impact.

"The substitution of ruminant meat [grazing animals like cows] with microbial protein in the future could considerably reduce the greenhouse gas footprint of the food system," says lead author Florian Humpenöder.

"The good news is that people do not need to be afraid they can eat only greens in the future. They can continue eating burgers, it's just that those burger patties will be produced in a different way."

What is the most environmentally-friendly meat substitute?

As any veggie or vegan in a well-stocked urban supermarket knows, there’s a range of alternative meats out there. So what sets microbial protein apart - and what is it exactly?

Broadly speaking, there are three groups of meat substitutes, explains Isabelle Weindl, PIK researcher and co-author of the new study published in the Nature science journal.

"There are plant-based ones like soybean burger patties, and animal cells grown in a petri dish also known as cultured meat, which is so far very expensive but got a lot of public attention recently.”

One tech food start-up made headlines last month with its lab-grown lion burgers, tiger steaks and zebra sushi-rolls - to a mixed reaction.

But most interesting to the researchers is the third kind: fermentation-derived microbial protein. It’s sure to have a catchier name on the supermarket shelves, where it is already widely available in the UK and Switzerland.

The biotech product is made from fermenting microbes like fungi in specific cultures, similar to beer or bread.

The biotech product is made from fermenting microbes like fungi in specific cultures, similar to beer or bread. The microbes are fed on sugar and kept at a steady temperature. And, even accounting for the sugar as feedstock, it requires much less agricultural land compared to cattle for the same protein supply.

Further evidence, should we need it, of how wonderful mushrooms are.

And while a protein-rich product that tastes as good as red meat might sound too good to be true, the technology has actually been hiding in plain sight since the 1980s. The US Food and Drug Administration (FDA) first approved a microbial protein meat alternative (mycoprotein) 20 years ago.

How can microbial protein help save forests?

In recent years, more and more people have switched to vegetarianism for environmental reasons. But as the world’s population grows, there is still an insatiable appetite for red meat. It means that enormous swathes of carbon-storing forests are being cleared for cattle grazing or for growing their feed.

To analyse what difference a greater uptake of the meat alternative would make, the team of researchers from Germany and Sweden ran a computer model with microbial protein. They looked at scenarios until 2050, taking into account future population growth, food demand and dietary patterns as well as dynamics in land use and agriculture.

"We found that if we substituted 20 per cent of ruminant meat per capita by 2050, annual deforestation and CO2 emissions from land-use change would be halved compared to a business-as-usual scenario,” says Humpenöder.

Reducing the numbers of cattle will not only ease the pressure on land, but also cut methane emissions from cows.

Reducing the numbers of cattle will not only ease the pressure on land, but also cut methane emissions from cows and nitrous oxide gases from fertiliser and manure management, he says.

“So replacing minced red meat with microbial protein would be a great start to reduce the detrimental impacts of present-day beef production."

Biotechnology offers a “promising toolbox” for a number of different environmental challenges, according to co-author Alexander Popp. But the PIK researcher adds that scaling up biotech food must be accompanied by a “large-scale decarbonisation” of the way fermentation tanks and other parts of the process are powered.

“If we do this properly, microbial protein can help meat-lovers embrace the change. It can really make a difference.”