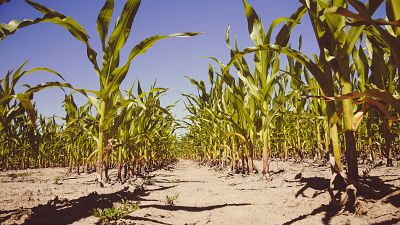 A research team at US and Chinese universities say they have discovered a way to help plants survive extreme heat.

With agricultural crops around the world threatened by rising temperatures, this research could help plants resist climate change.

If the findings can be applied to commonly grown crops, it could be vital for protecting food supplies during heatwaves.

Are crops affected by climate change?

The climate crisis is causing the likelihood of heatwaves to be up to 10 times greater in some places in the world.

Heatwaves can be deadly to agricultural crops. When hit by high temperatures and droughts, plant defences are weakened and crops become vulnerable to attacks by insects and disease-inducing pathogens.

Vast quantities of crops can be wiped out during heatwaves. This threatens human food supplies and the plants used for the production of livestock feed and biofuel for cars.

In northern Italy, which is in the grip of a heatwave and drought, crops such as rice and corn are being decimated.

What happens to plants in high temperatures?

Scientists at Yale University, the University of California, Berkeley and Duke University in the US and Tao Chen Huazhong Agricultural University in China say they have discovered the precise way in which heat causes plant defences to fail.

The research team experimented with a plant called thale cress, a member of the mustard family, which is commonly used in scientific lab tests.

The scientists studied a plant defence hormone known as salicylic acid. When plants are threatened by disease or pests, the levels of salicylic acid increase by up to seven times. This boosts the plant’s immune system and helps fend off the attack.

At particularly high temperatures, however, plants are unable to increase their salicylic acid levels leaving them defenceless in the face of pathogens or insects.

The scientists found this to be the case even during short periods of intense heat.

How can plants survive high temperatures?

Scientists have identified a way to prevent this drop in salicylic acid production to fortify plant immunity when temperatures rise.

If they are able to reproduce the same heat resistance in common crops, it could prevent food crises during periods of extreme heat.

The scientists tried to understand how plants feel temperature and looked for a way to alter this sense.

The team spent years studying the plants’ phytochromes, cells that act as internal temperature gauges and tell the plant when to begin growing and flowering during warmer spring weather.

They experimented on plants where the phytochromes were modified to be constantly active, but even these plants suffered weakened defences when exposed to high temperatures.

The team switched to “next-generation sequencing” instead, to study the plant’s genes at varying temperatures.

They discovered that many of the genes that “switched off” at high temperatures were controlled by a master gene called CBP60g.

When CBP60g got too hot and stopped functioning, it also prevented the production of the protein that allowed the plant to generate more salicylic acid. As such, under heat stress, the plant’s immunity was compromised.

Scientists found that if they created a mutant thale cress with the CBP60g gene permanently turned on, the plant was able to maintain its defence system and block attacks even in elevated temperatures.

The challenge now is to transfer this heat resilience to common food crops.

Plants such as tomato, rice and rapeseed perform similarly to thale cress under heat stress. The scientists are now testing rapeseed with the CBP60g mutation system and say the results are positive.

Should the gene mutation function similarly in other common crops, it could mean ensuring food crop yields remain consistent even in elevated temperatures.

There is no suggestion that using the gene mutation on crops would change the flavour of the food produced or pose any risk to consumers.