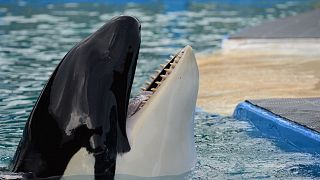 The Miami Seaquarium is set to end shows with ageing orca Lolita after half a century of captivity.

The 56-year-old killer whale is an icon in the Floridian city, amassing huge numbers of visitors since she began performing at the aquarium in 1970.

Taken from her mother and her seven siblings at age four, Lolita arrived at the Miami Seaquarium for a fee of just €5,500. While many other animals died in the facility, Lolita has been performing tirelessly ever since - all while living in the world's smallest orca tank.

Over the decades, celebrities such as Johnny Depp, Lindsay Lohan and Harrison Ford have campaigned to see the animal released. But it was an inspection by the United States Department of Agriculture that finally put an end to her suffering.

"The report showed that animals were suffering and dying in the Seaquarium’s tanks because of the poor care they've received," says PETA's Vice President & Deputy General Counsel Jared Goodman.

"So the tank was closed around that time and apparently will never open again."

Now the fight is on to help Lolita live out her final years in peace, far away from the torment of captivity.

"PETA is now calling for this to be the first step towards releasing Lolita to a seaside sanctuary, before this long-suffering orca ends up dying in the same cramped tank she’s been confined to for over half a century," adds Goodman.

When contacted by Euronews Green, the Seaquarium's parent company failed to provide information about the killer whale's future.

In their latest statement, the aquatic centre claimed that Lolita is healthy and eating well despite her advanced age.

“As with any animal who has exceeded their anticipated life span, we will continue to monitor and care for her closely.”

She would need to circle it 600 times to travel the same distance wild whales cover in a single day.

In the wild, whales like Lolita live as long as humans; in a tank, that life expectancy is cut in half.

In her native Pacific Northwest waters, whales like Lolita can live as long as humans; in a tank, that life expectancy is cut in half.

For now, the focus remains on freeing the orca from captivity and returning her to the wild - in the safest way possible.

"The initial focus should be on her health and welfare," says Executive Director of the Whale Sanctuary Project, Charles Vinick.

"Everyone should be focused on ensuring that we provide her with the highest quality of life she can have for the rest of her life."

Watch the video above to learn more about Lolita.