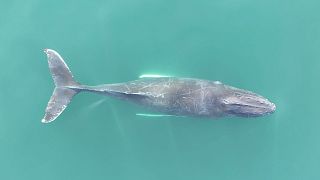 “I have a window at eye level in bed, so I can just wake up and look for whales,” Flordespina Dodds laughs. “That's been quite a highlight this year.”

A researcher at Whale Wise, Flordespina’s early morning marine mammal watching isn’t just for fun. She’s part of a team that has made it their mission to uncover the secret lives of humpback whales through their scars.

The storied skin of these mighty creatures could reveal whether entanglement in fishing nets is an even bigger threat than first thought.

How damaging are fishing nets to whales?

As mammals, humpback whales and other species like dolphins and seals need to surface regularly to breathe. If they become entangled in large fishing nets, the animals can get trapped underwater and eventually drown.

Estimates from as far back as 1995 show that entanglement was responsible for a 5 per cent annual mortality rate among humpback whales, and this has likely only increased in recent years.

A 2019 study found just how widespread this problem is, with 25 per cent of humpback whales surveyed bearing entanglement scars.

The team has just returned from a three-month trip collecting data and images of humpback whales in Iceland using drones. The country plays host to around 5,000 humpbacks every summer, a third of the North Atlantic population, making it an ideal spot to monitor them.

Despite challenging weather in the last few weeks, they have taken aerial videos of whales swimming off the coast of Iceland. The researchers are looking for a relationship between entanglement scars and the body condition of humpback whales, to see if entanglement poses a risk to the animals long after they’ve escaped the net.

For the ones that survive... is it still having an impact on those whales?

“We know entanglement kills a lot of whales every year and we know that it's a big threat for that reason,” explains Tom Grove, co-director of Whale Wise and co-lead for the Scars From Above project. “But for the ones that survive, even years after entanglement, is it still having an impact on those whales? We're trying to look for these hidden impacts using drones.”

The team are seeing whether whales with entanglement scars are thinner or in worse condition than they should be, for example. A fatter whale is a healthy whale, with enough blubber to give it energy and warmth in the cold seas and keep them buoyant in the water.

If entanglement causes stress or affects whale feeding habits, the impact on the overall species could be far greater than currently believed.

How do you keep track of the whales?

Every day, the team wake up and look outside at the nearby coastline to see if they can spot any whales.

They’ve also been working closely with local tourist groups and fishers. With more and more eyes on the water, they have a better shot of being able to get the drones out in time and successfully film the humpback whales.

“We're fortunate in that we're getting to know fishers really well and they're starting to share their whale sightings around Iceland,” says Tom. “Establishing these relationships is really important when we are studying the potential impacts of the fishing industry itself.”

And Whale Wise are not just getting better acquainted with Iceland’s human population. Last year, the researchers travelled to collect whale snot - another key to humpback health. The cortisol hormone in mucus provides a clue to how stressed the whales are.

Flordespina shared that they do recognise some of the returning whales, including one nicknamed Four Eyes for the unique white markings behind its eyes that look like another pair.

“Obviously, we don't know the whales, but it feels like it,” Flordespina says. “This year, we saw one that we saw last year, so it’s like [seeing that] our friend is back.”

What can whales tell us about the wider ecosystem?

Not only will these potential findings illuminate just how much entanglement affects humpback whales, but knowing more about the health of humpback whales could also help to paint a more detailed picture of the entire ecosystem.

“If you want to look at the impact of climate change on the ecosystem in the long term, humpback whale body condition could be an important marker for that,” adds Tom. “That could be a really important part of your ecosystem assessment, given that monitoring fish and plankton and the entire ecosystem is challenging and expensive.”

For example, seeing a thriving population of humpback whales in one area means there must be a similarly healthy population of krill and other small fish for them to feed on. These smaller species are often affected by processes like ocean acidification or rising sea temperatures, so their populations can in turn offer insight into the overall health of an entire ecosystem.

So why is Whale Wise doing this?

The idea is that, following a further three-month stint in Iceland next year, the team will be able to take this information to the North Atlantic Marine Mammal Commission (NAMMCO), the regional body that monitors and manages whale populations, including humpback whales.

The hope is that the threat of entanglement to humpbacks will then be taken more seriously and action can be taken to protect the ocean’s gentle giants.

As humpback whales have been hunted to near-extinction in the past, protecting them from further harm is vital not just for the species, but the ocean ecosystem as a whole.