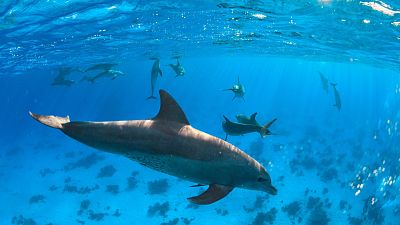 Dolphin poo could be the key to saving the world’s coral reefs, according to a new study.

Spinner dolphins, famous for their acrobatic marina displays, have some very special excrement. Their poo has “reef-enhancing nutrients” which are not to be underestimated, a report by Zoological Society London (ZSL) finds.

The dolphins are giving threatened coral reefs in the Maldives and Chagos Archipelago a helping hand by pooing in the shallow lagoons. Published this week, the study shows that the amount of nitrogen absorbed by spinner dolphins during their daily commute can improve coral reef productivity and resilience.

The species plays a “significant role” in supporting the vulnerable ecosystems in this region and scientists are calling for their protection.

What are spinner dolphins and where do they live?

Spinner dolphins are about 6.5 feet (around 2 metres) with a long, thin snout. They have white stomachs and dark grey backs and live in warm ocean waters around the world, including near Thailand, along the Pacific coast of Central America and around the Hawaiian islands.

The species is not classified as endangered on the IUCN red list, but it does face threats from potential entanglements with ghost nets and other marine debris, collisions with ships, noise disturbance, habitat degradation and human activity.

How did scientists find out dolphin poo was special?

A team in the Maldives used a combination of visual observations and underwater recordings, some hailing from tourist whale watching trips, to monitor the spinner dolphins. Around 105 spinners live in this area.

They noticed that the dolphins enter atoll lagoons (ring-shaped coral reefs) in the morning, where they then spend half the day resting, before leaving in the afternoon to hunt and forage in the deeper waters at night.

During the first half of the day, conservationists estimated that one dolphin pod would excrete around 288kg - or about the weight of 3-4 human adults - of reef-enhancing nitrogen into the shallow lagoons.

Simply by going to the toilet in the shallow atoll lagoons, these dolphins are providing a vital nutrient supply for the corals.

"Coral reefs are facing profound threats around the world, including climate change and biodiversity loss, but this research has identified a clear ally for them: spinner dolphins,” says lead author and marine research fellow at ZSL’s Institute of Zoology, Dr Tom B Letessier.

"Simply by going to the toilet in the shallow atoll lagoons, these dolphins are providing a vital nutrient supply for the corals - making the strongest possible case for protecting the dolphins in order to save these reefs."

Why are coral reefs so important?

Coral reef ecosystems support most of the biodiversity in the oceans as well as sustaining over 6 million people’s livelihoods. They also protect coastlines from storms and erosion, provide jobs for local communities and are the basis of many holiday activities.

The ecosystems they form in tropical regions such as the Chagos Archipelago support a huge amount of biodiversity.

In the Maldives - where clear, pristine ocean is often unproductive - coral reefs are what locals rely on to get by. However, while these habitats are critical for both human and marine life they are also highly threatened by the current biodiversity crisis. The effects of climate change cause extreme stress on reefs, leading to coral bleaching and mass die off.

Coral bleaching is the process when corals become white due to various stressors, such as changes in temperature, light, or nutrients. Coral bleaching matters because once these corals die, the reefs rarely come back.

“It’s exciting to have found a likely important mechanism by which the dolphin’s behaviour could be sustaining the health of surrounding reefs,” says Dr Letessier.

“This study is just the first piece in a bigger puzzle which we will explore further as part of our new regional scientific cetacean project.”