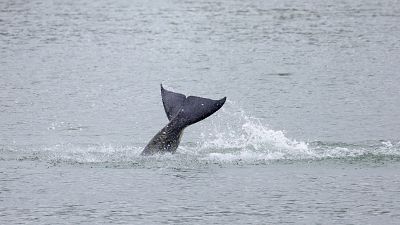 A sick orca that spent two months swimming up France’s Seine river has died from natural causes, according to environmental NGO Sea Shepherd.

It was discovered by Norwegian freight ship travelling up the waterway towards the city of Rouen. A sailor spotted the killer whale lying on its side on the banks of the river between Rouen and Le Havre.

Following the sighting, NGO Sea Shepherd France approached the animal on a boat and found that it had died.

On Twitter, the Sea Shepherd France association confirmed having "found the body of the killer whale (Monday) morning at 11:48 am."

“We are currently with her to prevent her body from being hit by a ship, which would compromise the autopsy. We are waiting for the team mobilized by the State to recover her,” the organisation wrote in a Twitter post.

French authorities have been following the orca which has been stranded in the Seine river for weeks now. Since the 5 April, it has been spotted multiple times swimming some 30 kilometres from the English Channel.

The group of experts in charge of monitoring the animal decided on Sunday to euthanize the whale after efforts to guide it towards the sea failed.

They tried using drones playing orca sounds to lead it back to the ocean but were unsuccessful. This method was used to avoid bringing boats near the animal for fear it would cause it extra stress.

Experts plan to carry out an autopsy on the whale

Officials say the orca was in a critical state of health, having become very weak after spending a long time in fresh water. They also believed it had a fungal infection called mucormycosis, also known as black fungus, which was impacting its organs, skin and brain functions.

The body of the orca will now be towed to the banks of the Seine. There, the prefecture of Seine-Maritime says " lifting means will be put in place to allow expert veterinarians and biologists to carry out an autopsy and sampling operations.”

They are hoping to collect enough information to work out why the porpoise travelled so far from home and eventually ended up dead on the banks of the Seine river.