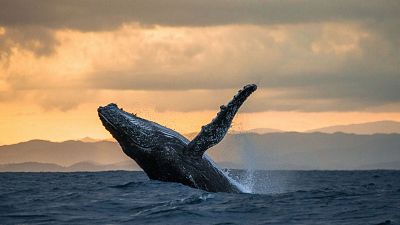 Iceland is one of the only countries in the world that still hunts whales commercially. But now it has announced it plans to end the practice by 2024, as demand for whale meat dwindles.

For the past three years, the island nation's whalers have barely taken their boats out into the North Atlantic despite the country's large quotas.

"There are few justifications to authorise the whale hunt beyond 2024", Fisheries Minister Svandís Svavarsdóttir, a member of the Left-Green party, wrote in Morgunbladid newspaper on Friday.

"There is little proof that there is any economic advantage to this activity," she said.

Svavarsdottir's words were echoed by Gísli Vikingsson, a marine biologist and whale specialist at the Iceland Marine and Fresh Water Research Institute.

"Even if whaling is sustainable from a biological point of view, it might not be socially or economically sustainable, and that's again outside our field," Vikingsson said.

The number of boats taking part in the hunt continues to shrink as well.

In 2021, 575 whales were harpooned in Norway, less than half the authorised quota, by the 14 boats that are still operating.

Iceland, Norway and Japan are the only countries that allow commercial whale hunting. This is despite criticism from animal rights activists and environmentalists, concerns about toxins in the meat, and a shrinking market.

In Iceland, whales have become the stars of a flourishing eco-tourism scene in recent years.

More than 360,000 whale watchers flocked to the waters of the North Atlantic off Iceland to admire the majestic creatures in 2019 before the COVID-19 pandemic paralysed the tourism sector.