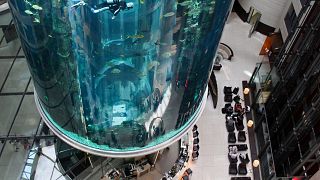 A diver cleaning the AquaDom aquarium in Berlin in 2011   -   Copyright  AFP
The opinions expressed in this article are those of the author and do not represent in any way the editorial position of Euronews.
By Christopher Sebastian  •  Updated: 21/12/2022

There’s an early episode of ‘The Simpsons’ where the family visits the zoo and a bright red banner at the entrance reads in white capital letters, “SEE YOUR ANIMAL FRIENDS IN PRISON.” The joke lands because when you stop and think about it, it’s true.

Last week four chimpanzees, one wounded, were on the loose inside a building at a zoo in Furuvik, Sweden, while three had already been shot dead. Officials said the injured animal had not yet received medical attention because no one could safely get inside the building.

Less than 24 hours later, another story of captive animals emerged. The 15.85-meter AquaDom aquarium at the Radisson Blu hotel in Berlin exploded, spilling 1 million litres of water into the hotel and killing all but 30 of the 1,500 fish inside.

But perhaps the saddest story of all is about a rare pair of endangered red panda cubs. Twins Tala and Sumi were born this summer at Longleat safari park in Wiltshire, England. As temperatures hit sub-zero, the young cubs were found dead in their nesting box. A spokesman for the park said it is thought they died from hypothermia.

We are incredibly sad to share some recent news from the park with you. pic.twitter.com/NYcvmFnwR2

It’s hard to believe all these tragedies occurred at all but it’s even harder to digest that they all happened in the same weekend.

Mishaps involving animals in captivity should be rare given all the expertise and facilities they have at their fingertips. Never mind that zoos claim to be standard-bearers of conservation, environmentalism, and animal care. But it doesn’t look like that’s happening (if we can believe it ever did). Regardless of the stated purpose, it’s getting harder and harder to justify humans keeping other animals behind bars.

Aquatic ecologist: AquaDom was doomed from the start

Wasseem Emam of Ethical Seafood Research is an aquatic ecologist who has worked with the Aquatic Life Institute and the European Parliament Committee on Fisheries. He wasn’t surprised by the Berlin aquarium. He didn’t expect it to explode, but he says the signs were there that it could end in tragedy.

“When I first heard that they built it, it looked like one of these vanity projects. So there are always risks there. Plus, it wasn't built with a fish's needs in mind. Like, what exactly does a structure like that do to a fish?”

Emam says it’s nearly impossible for fish kept in a cramped aquarium to engage in their natural behaviours. “Ideally you want to give access to live feed. Variations in temperature are important. Their ability to reproduce is a need to be met. Plus, a lot of these species like to hang out in the middle of the water column, where they can school or shoal [congregate in a loose social structure]. That’s much harder to do in a vertical structure [like the AquaDom].”

When animals can’t behave as they would in the wild, they often experience zoochosis. This is a psychological condition where captive animals exhibit monotonous, obsessive, repetitive actions that serve no purpose. Repetitive head swaying, bar licking, or pacing are common. Put simply, zoochosis is a sign of mental anguish and it’s a common indicator of poor welfare.

Animals escaping and being shot is very common

Dr Mark Jones is a vet and head of policy at Born Free. He was at pains to stress that incidents of animals escaping enclosures “happens all the time.”

It’s not always made clear how they escape or who is at fault. But in the past 5 years he has heard of bears, a snow leopard, and monkeys being shot after escaping enclosures in the UK. Two chimps were shot in the Netherlands after escaping. And there were reports of a lioness shot dead in Belgium and a bear shot dead in Germany. Of course, animals are not always shot dead. Some are tranquilised and returned. But shooting fugitive animals is seen as the quickest way to resolve the situation.

Conversely, zoos also have to keep animals in enclosures safe from other animals. Dr Jones said, “The inability for wild animals to flee conflict is a major moral implication of zoos.”

Some Houdini animals go to other enclosures and wreak havoc on the residents there. This was the case with a jaguar who escaped the Audubon Zoo in New Orleans, killing a staggering nine other animals, including five alpacas, two foxes, and one emu.

How are zoos in Europe regulated?

The public are often kept in the dark about these incidents because zoos have no obligation to report them. Given that, how are they held accountable when catastrophes happen?

Well, they’re not. European Union and national laws underregulate the treatment of animals kept in captivity for entertainment purposes.

Alice DiConcetto is a legal advisor at the European Institute for Animal Law and Policy and an adjunct lecturer in animal law at the Sorbonne. She says that legislation for protecting these animals is paper thin, literally.

“In 1999, the EU enacted the Zoos Directive which says that to the extent that we allow some animals to be held in captivity for the purpose of conservation, we ask member states to ensure some sort of regulation of zoos and aquaria. That law is two pages long.”

The Zoos Directive leaves it up to member states to decide who carries out the inspections and how the rules are enforced. But national laws aren’t much better. In the Swedish regulation implementing the Zoos Directive, the one rule applying to zoos (Section 6) is as vague as the EU Directive. It only requires that zoos be licensed and provides no further detail. German legislation has the same shortcomings in that they are equally general.

Can zoos be reformed?

The good news is that the public and some legislators actually do want change. That’s where organisations like the European Institute for Animal Law and Policy get to step in and help guide the crafting of legislation. They encourage laws that mean animals are kept in good welfare conditions, provided with enrichment materials, and housed in safe enclosures that respond to their biological needs.

With those two pandas, in particular, it's very problematic because zoos justify their existence by saying we care for those animals.

But of course if you’re a pair of baby red panda twins who froze to death, the promise of future legislation is small comfort. As DiConcetto says, "That's a big issue. With those two pandas, in particular, it's very problematic because zoos justify their existence by saying we care for those animals. A recurring talking point of zoos is ‘Oh, those animals wouldn't survive in the wild so we take care of them.’ And precisely in that case, no they don't. So what's the point exactly of taking those animals from the wild, putting them in captivity, and you don’t even protect them from death?”

A pointed question that doesn’t really have a good answer except that locking up others is so common that it’s become almost unremarkable.

During one unforgettable scene in the classic 1971 film Harold and Maude, Ruth Gordon as 79-year-old free spirit Dame Marjorie "Maude" Chardin said, “You know, at one time, I used to break into pet shops to liberate the canaries. But I decided that was an idea way before its time. Zoos are full, prisons are overflowing...oh my, how the world still dearly loves a cage.”