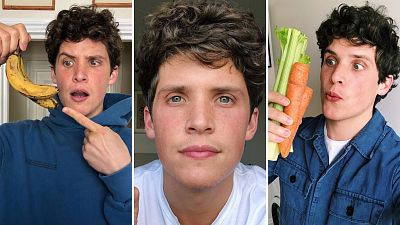 With a devoted Instagram following of over 250k, a cookbook hailed ‘the second most sustainable in the world, 2020’ and an irresistible smile, Max La Manna is making an impact as the poster boy of zero waste cooking.

“I was more or less born in a kitchen,” he tells me, from his mother-in-law’s house in Gloucestershire. “My dad bought his first two restaurants just two weeks after I was born. I grew up on home-cooked meals, we rarely ever went out to eat. That’s a privilege in itself, I consider myself lucky.”

So you watched your parents cook from a very young age, is that where you get your love of food from, I ask?

“Yeah, we had a small garden where we grew vegetables and herbs. I always loved anything that allowed me to put my hands in the mixing bowl.

“Actually, my surname means ‘the great hands’. So I find that really interesting, this is what I’m meant to be doing. I’m meant to be using my hands to cook and put food together.”

Using his hands led Max to the restaurant industry, where he did just about every job you can think of. His first job was at a pizza place, making fresh pizza dough every day. From his home town of Connecticut, Max then moved to New York where he managed restaurants, played host and even washed dishes, while acting and modelling on the side.

“I think if I had to run a restaurant today, I could,” he says proudly.

It wasn’t until he moved to Australia, in his twenties, that Max started to notice how disconnected he felt from nature. “I was in this beautiful place, and yet there was trash everywhere - I would come across plastic bottles while swimming in the sea.”

“It got me thinking back to the kitchen, which is what I know, and the waste we create there. I thought, what's happening to the food I’m wasting, where is it going - how can I shop more resourcefully? I just went down this rabbit hole thinking about how everything is produced.”

Fast forward six years and Max’s passion for saving food has grown and grown. He began making videos for YouTube before joining Instagram, where he showed people how to cook using “the whole ingredient.” From turning carrot tops into pesto, to making a cake using leftover chickpea water, there’s nothing he hasn’t tried - and it’s all plant based, as the name of his book would suggest, More plants, less waste.

“We live in a linear economy where something is created, we use it and then we dispose of it. It shouldn’t be like that,” he explains. “20 million slices of bread are wasted in the UK every day. Instead, we should be freezing them to make croutons, or breadcrumbs, or bread pudding.”

Then there’s potatoes, which are being wasted in their droves according to Max. The main problem is uniformity. People peel their potatoes because they want them all to look the same.

In true form, he suggests baking those potato skins, seasoning them - “and then you have chips!”

What you eat can save the planet

But it’s not just saving food for the sake of it, Max is acutely aware of the role our eating habits play in the climate crisis.

“Food waste, around the world globally, causes six times more emissions than air and ground transportation, that’s according to a report by Waste & Resources Action Programme,” he tells me.

Those are some scary statistics. So if it’s all about food, doesn’t that mean living sustainably in other ways is ultimately pointless?

He’s right. In the EU, around 88 million tonnes of food waste are generated annually, with associated costs estimated at 143 billion euros, according to the European Commission. Wasting food is not only an ethical and economic issue, it depletes the environment of its limited natural resources.

What comes next is a metaphor I’ve never heard before, which Max says he heard a scientist say once, and it’s shaped his view of climate change ever since.

“If you place a frog in a pot of boiling water - the frog will jump right out. Right? But if you place that frog in room temperature water and increase the heat slowly, slowly, little by little, that frog will die in the water.”

What’s happening is exactly that, our planet is heating up, he explains. While it’s easy to feel overwhelmed by it all, Max tries to rise above it all because that’s the only way we’re going to move forward. By breathing new life into food scraps and leftovers, he’s doing more than his fair share for planet earth.

He leaves me with what he says is something we must all remember, when we sit down to eat each day. A simple, but powerful sentence that has stayed with me ever since, and will no doubt stay with you too.

“Climate change is on your plate.”

Swamped with sprouts? Our guide to fighting Christmas leftover waste