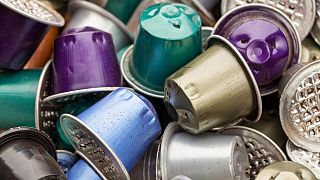 Coffee pods are often shunned due to the packaging waste they create. But new research suggests they might be greener than using a traditional coffee maker.

It is estimated that around two billion cups of coffee are consumed globally each day, with Europe accounting for around a third of this caffeine rush.

Capsule machines have taken off in recent years as an easy way to prepare coffee at home. Yet many perceive them as environmentally unfriendly due to the difficulty of recycling their single-use plastic or aluminium pods.

Researchers at the University of Quebec have looked beyond packaging to assess the environmental impact of coffee. They investigated the carbon footprint of several techniques used to prepare coffee at home.

The results, published in The Conversation, reveal that coffee pods aren’t the biggest carbon culprits.

What is the greenest way to make a cup of coffee?

The study took into account the entire lifecycle of a cup of coffee.

"Focusing the debate on coffee pods hides the most effective ways to reduce the carbon footprint associated with coffee consumption at the individual level," says study co-author Luciano Rodrigues Viana. "Hence the interest of assessments based on life cycle assessment (LCA)."

The researchers calculated the greenhouse gas emissions from the agricultural production of beans, packaging, transport, roasting and grinding, brewing, waste and even washing up.

The results were clear: filter coffee carries the largest carbon footprint. This is primarily because it uses the greatest quantity of ground coffee - 25 grams to produce 280 millilitres, compared to 17 grams for French press, 14 grams for capsules and 12 grams for instant.

Soluble instant coffee came out as the most environmentally friendly option. This is due to the lower amount of coffee needed, lower electricity consumption from the kettle compared to a coffee maker, and absence of organic waste.

The results shift in light of the fact that most consumers use around 20 per cent more coffee than they need per cup, and heat twice as much water as is necessary, according to the researchers. With this in mind, coffee capsules win out as the greenest option because they ensure the optimal amounts of coffee and water are used.

Coffee capsules win out as the greenest option because they ensure the optimal amounts of coffee and water are used.

"I don’t think that capsules are a miracle solution. But it is a good example that illustrates our cognitive biases," says Luciano.

"The agricultural phase is the most polluting. Consumers need to know where the problem resides in order to act. We need to ask ourselves what is behind our products," says Luciano.

He adds that, although coffee consumers have a role to play in reducing their carbon footprint, it is primarily the governments of coffee-producing countries and multinational companies that are responsible for change.

Luciano says they should focus on making coffee production less dependent on irrigation systems, fertilisers and pesticides, while avoiding deforestation.

How carbon intensive is coffee production?

Regardless of the type of coffee preparation, coffee production is the phase that emits the most greenhouse gases. It contributes between 40 and 80 per cent of the total emissions, according to the researchers.

This is due to the intensive irrigation and fertilisation systems required for commercial coffee growing, and the use of pesticides and nitrous oxide-emitting fertilisers.

Coffee produced by the least sustainable means generates as much carbon dioxide as the same weight of cheese and has a carbon footprint only half that of beef, according to 2021 research by UCL’s Professor Mark Maslin and PhD student Carmen Nab.

Climate change could reduce the global land area suitable for coffee production by about 50 per cent by 2050, according to a study conducted at Zurich University. In the same timeframe, demand is set to triple, predicts nonprofit Conservation International.

How can you reduce your coffee’s carbon footprint?

While the onus is on producers and suppliers to address the most emissions-intensive stage of the coffee lifecycle, there are ways you can reduce its environmental impact too.

"At the consumer level, avoiding wasting coffee and water is the most effective way to reduce the carbon footprint of coffee consumption," says Luciano.

To reduce the carbon footprint of your cup, measure out the recommended amount of coffee and water to reduce waste.

While a coffee capsule machine does this step for you, be careful not to over consume. The ease of making coffee in this way can lead people to double their coffee consumption, the researchers warn, reversing any environmental gains.

If you use a capsule machine, be sure to recycle your pods - or better yet, opt for reusable or compostable alternatives.

For filter coffee makers, avoid leaving the hot plate switched on. And when washing up, try using cold water instead of hot.

Reducing consumption is one of the best ways to reduce your coffee footprint.