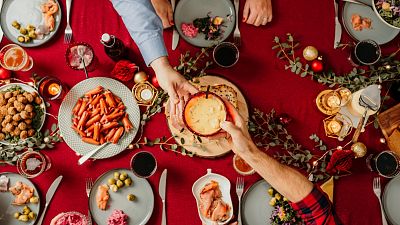 This Christmas is going to be unlike any we’ve had before. The coronavirus pandemic means gatherings are likely to be far smaller, with many of us relying on Zoom calls to connect with our families.

These scaled down celebrations mean that a lot of us are likely to be swamped with an abundance of leftovers. This is especially true for millions of people in the UK, who were told last Saturday that Christmas was effectively cancelled. My own mother-in-law, for example, had just bought enough food to feed 10 of us when Prime Minister Boris Johnson announced that large swathes of the country were now expressly forbidden from mixing indoors.

So for people like my in-laws, what do you do with all that food? Freezers are only so big, which means a lot of produce is destined for landfill - and that’s a major problem.

Food production is seriously damaging the planet. If it were a country it would rank third after the US and China in terms of greenhouse gas production. When food heads to landfill it generates large quantities of methane.

If we could prevent this type of waste, it would cut down on carbon emissions the equivalent of taking one out of every four cars off the road.

The best thing to do is not to overcook in the first place. If you are sure how not to make one plate too many, Admiral has a handy tool for checking exactly how much you really need to make for the number of people eating.

But sometimes overcooking is simply inevitable. So with the planet in mind, here are our top tips for using your leftovers wisely.

It’s only right to start with curry - the unofficial national dish of the UK. The beauty of curry is that it comes in a multitude of forms and styles, and is absolutely perfect for using up leftover meat and vegetables. Plus it’s perfect for freezing.

My aforementioned mother-in-law is the absolute queen of reducing food waste. There’s never a bundle of withering vegetables left lurking in her fridge: everything is used.

A staple of Christmas in her house is a delicious post-Christmas turkey curry made by her brother-in-law - and it’s become a regular feature in my own house now too.

I don’t have their recipe to hand, but this one from Pinch of Nom is a great alternative - plus it puts the ever-controversial brussels sprouts to work too.

For vegetarians and vegans, there are plenty of alternatives - including this potato recipe from Sanjana Feasts.

Another British tradition bubble and squeak dates back to the 18th century, and has been dubbed one of the “great peasant dishes of the world”.

It’s effectively a hash of sorts and is commonly eaten on Boxing Day (26th December).

I refuse to believe that anyone uses a recipe for this dish, as I tend to throw all the leftover potatoes, sprouts, carrots, and parsnips into a wok for a few minutes on high heat.

However if you prefer a slightly more official (and no doubt tastier) version, this Jamie Oliver recipe comes highly recommended by more culinarily skilled friends.

Like bubble and squeak, the frittata is another dish that’s just perfect for smashing leftovers together - albeit with eggs and cheese in the mix.

It’s a truly versatile meal - plus it’s perfect for wrapping up and taking on post-Christmas walks. Potentially the only opportunity you’ll have to get out of the house this year.

This recipe from delicious is both simple and spicy, with the addition of jalapenos. Plus it can easily be made vegetarian by removing the bacon.

Alternatively, this vegetarian option from Runner’s World is perfect for fitness lovers and couch potatoes alike.

Her Boxing Day pasties cost just €0.14 to make and can be frozen to enjoy year-round.

If you like this, we highly recommend grabbing yourself a copy of one of her many recipe books for more low-cost dishes which help to eliminate food waste.

I’m returning to another staple of my mother-in-law’s. Thanks to her plentiful allotment, soup is available 24/7 in her household - and it’s definitely one of the best ways to avoid food waste.

From a myriad of vegan soup options, remember that meat can also be transformed into particularly brilliant dishes too - so nothing needs to go to waste.

There are more soup recipes than you could ever need on the internet already, but one of my favourites is from The Kitchen Shed.

Hopefully, these go some way to inspire your kitchen-based creativity, but this certainly isn’t an exhaustive list by any stretch of the imagination.

One of the best things to do is not to see your leftovers as remains from a previous meal, but as ingredients for the next one.

Websites and apps like Supercook are brilliant at generating options from all the bits and pieces rattling around your fridges, freezers, and cupboards. Plus there’s content creators like Max La Manna who have hundreds of zero-waste recipes to hand.

‘Climate change is on your plate’: Max La Manna on cutting food waste