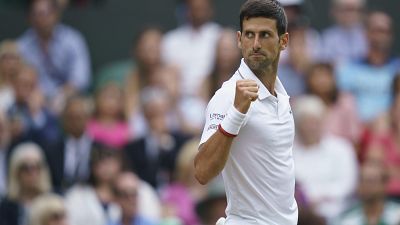 Not only was the game hard fought against eight-time champion Roger Federer, it lasted four hours and 57 minutes becoming the longest Wimbledon singles final in history.

Winning on an impressive tiebreak, critics are examining how and why Djokovic was able to defend his Wimbledon title with such calm, concentration and a flawless technique. Was it down to his superior record of rallies over Federer, or was it something else? A plant-based diet perhaps?

Just a few days before the final of Wimbledon 2019, Djokovic was quoted crediting his plant-based diet as the secret to his impressive bouncebacks following injury. At a post-match conference, the tennis champion credited his good health to the diet, but crucially, was opposed to calling himself a vegan.

“I don't like the labels, to be honest. I do eat plant-based, for quite a few years already,” he told reporters.

"But because of the misinterpretations of labels and misuse of labels, I just don't like that kind of name. I do eat plant-based. I think that's one of the reasons why I recover well. I don't have allergies that I used to have any more. And I like it."

What's the difference between ‘plant-based’ and vegan?

In essence, veganism and plant-based eating are the same thing. Both involve the elimination of all animal products such as meat, fish, eggs, dairy and gelatin, and diets heavily revolve around fruit, vegetables, legumes, grains, nuts and seeds.

However, there is much debate about where the line is drawn between a plant-based diet and a vegan diet. For instance, makers of pro-vegan documentary Forks Over Knives have argued a plant-based diet means a person would draw most of their nutrients from fruit and veg, but may also choose to include small quantities of meat or dairy from time to time. Meanwhile, a vegan diet strictly excludes all animal-derived products.

On the other hand, food blogger Shane & Simple claims some foods would be considered vegan, but not plant-based. He cites the example, that crisps, chips and fries qualify as vegan, but since they don’t bear no resemblance to the plant in its original form, they could not be considered plant-based.

Perhaps the main difference is the devoted philosophy associated with veganism. Nowadays, identifying as vegan does not only mean eating plant-based foods, it is also synonymous with animal rights, politics and ethics, and a specific kind of lifestyle. Vegans don’t wear fur, leather, or even wool or silk, and will often buy cosmetic products, such as make-up, that are cruelty-free and made from organic ingredients.

So the differences between vegans and plant-based eaters are primarily to do with lifestyle choices, such as the clothes they wear and the activities they participate in. But overall, they are fundamentally the same. Given the significant health benefits claimed, it’s no wonder more and more athletes have adopted the diet over the years, to enhance performance and give themselves that competitive edge.

REVIEW | What are the best vegan chicken-style nuggets?

Why hidden ingredients mean your wine might not be vegan

What's really in your veggie burger