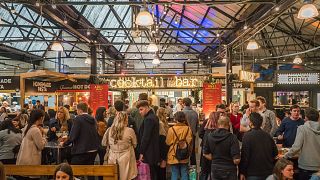 From organising dinner parties for his friends aged 6 to bringing together inspired cuisine from cultures around the world, Andrea Rasca has always been passionate about sharing food. A passion he makes clear when I first meet him in Mercato Metropolitano's newest venue, a deconsecrated 19th-century church in Mayfair, by conjuring a plate of incredible Italian produce and insisting I help my self as he starts to tell me the market’s story.

“I was sponsored by the European Commission to go to Japan,” Rasca recalls, “I tried to help Italian companies export but it was the way that I wanted them to export that brought me here.” A personal approach was his method, instead of advertising he wanted them to open small stalls and shops to talk to people about the cultural significance of the food. “This has always been what I’ve been passionate about, food and community,” he adds, “Food alone is not everything because eating alone has never been a great experience.”

A distinctly Italian respect for food

The idea for a sustainable food market was born in a disused railway station in Milan during the 2015 World Expo. Rasca took this space and sympathetically transformed it into a busy food hall; his concept was filled with a respect for the provenance of food and history of the location.

Despite the less than salubrious surroundings and without advertising, the first Mercato saw 2.5m visitors in four and a half months. According to Rasca, the market was featured in 956 newspapers and magazines all around the world during this very short period. When the site’s owner decided it was time to develop the space, Mercato moved on looking to open its next venue.

London was a far more competitive market than Milan, “we had 50 or 60 markets, 23,000 restaurants and by the way a 1000 years old market right next to us,” he says. They wanted a hidden gem not somewhere with conventionally high footfall and in Elephant and Castle a building that was previously a paper factory proved the perfect central opportunity to expand on the social venture.

With a location so close to central London, it’s unsurprising that the collection of 50 different stalls has proved a popular springboard for small businesses. In 2018, the market had 60,000 visitors a week making £15.2 million in a place with little local interest to draw customers. Rasca hopes these interesting and innovative food entrepreneurs will provide a model for the future of dining out but Mercato is about more than just the food; community is equally important.

Food as a diplomatic tool

It’s unsurprising to learn Rasca loves to travel and with that appreciate the intercultural communication that can be brought about using the language of food. “Its possibly the most important soft diplomacy tool we have in the world,” he says, “it is what has always shaped our culture.” Using this universal language, Mercato has become an inclusive space that is strengthening the communities that use it.

In MM’s business model “the sustainability factor and the community factor are intertwined, they cannot be detached, they are the same thing”. To create a truly sustainable community, he explains, you must make it inclusive, he suggests, “the part of sustainability that refers to the climate and to the environment is fine but if you don’t put the human being at the centre it becomes an audit exercise.” Paper straws and plastic bans are nothing if you aren’t making sure that people don’t go hungry.

Before opening in South London, Mercato consulted with the local council and found that a number of children were at risk of going without food during their summer break. Instead of using just the £1.20 provided per child per day, or even attempting to make a profit as some others may be tempted to do, the founders wanted to create something more. “The best thing a business should be able to do is to entrench themselves in the community and social work rather than having happy hours and discounts,” Chief Operating Officer, Amedeo Claris stresses.

The programme, he explains, isn’t just about providing them with food but tries to build confidence through social events and sporting activities as well. By drawing attention away from this aid they hope it can destigmatize the act of taking food by making it a part of a larger, more community-focused education scheme.

Last year, “Female Food Founders” saw Nancy Nosel awarded space to run Ze Spätzle Club at MM for a year. “Violence against women is also not creating the circumstances for them to succeed,” Rasca asserts, “We have incredible chefs but in terms of entrepreneurship women in this field still, find it difficult.” Such was Nosel’s success, a total of 3,800 dishes sold in just three months, that she has been given a larger stall at the market to continue selling her authentic German cuisine.

In an effort to repeat this nurturing of underrepresented groups, MM created “Founders Without Borders” to give another entrepreneur a chance to launch their food business. Developed with partners from The Entrepreneurial Refugee Network, the programme not only encourages participants like winner, Muzaffar Sadykov to feel like they have a home at MM but also showcases the value that refugees can bring to a community.

As we speak about social enterprise it is clear that people are at the centre of what drives Mercato. Rasca discounts the greenwashing carried out by other supposedly green businesses as being a kind of box-ticking environmental accountancy activity. “It’s a word that has got very little meaning these days,” he says when sustainability is mentioned.

From steamed buns to excellent espresso

Vendors have to meet certain standards in order to become a part of the market including expectations of nutritious, healthy and sustainable food. It isn't just ridding themselves of single-use plastic but rather a more holistic approach to social change that the bosses want from potential stallholders. The newly launched site in Mayfair sees established brands like sustainable gin distillery Jim and Tonic expanding their venture with a unique bar at the altar of the converted church alongside other, newer vendors nurtured by Mercato.

I ask Rasca what he would recommend from the new market's selection and he suggests Steamy&Co. With hot, soupy dumplings and wholemeal bao buns, the fledgeling business is a good example of internationally influenced, nutritious food and was chosen as one of the inaugural stands for Mercato Mayfair because of this. Their panko mushroom bao is packed with piquant pickled cabbage, hoisin and an unconventional garlic and jalapeno aioli.

Incredible coffee and gelato from Badiani, a company in operation since 1932, Turkish cuisine from Lala and seafood from Molo provide variety over the two floors of the converted church. The Mayfair site feels like a space for community with its open vaulted ceilings closing off to corners for more intimate interactions.

Mercato isn't stopping there; with a factory and a hydroponic farm all coming to London next year the business is attempting to change the model for success in an ever more environmentally conscious world. By providing a working example the London market is the perfect location to “try new things, to try to figure out what kind of cities we want to live in in the future”.

This team are making amazing cocktails with sustainable London gin