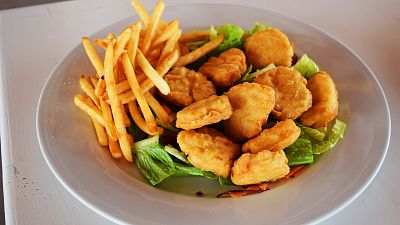 The epitome of comfort food, the chicken nugget is a fixture of many childhoods. But with the explosion in meat reduction and the rise of veganism, many are unwilling to give up this beige treat.

So we put them to the test to find out which vegan nuggets can truly stand up to its meaty alternative.

We have so much to thank Europe for. Many of the nuggets on this list have been imported from Europe, where the vegan movement is surging ahead.

The hilariously-named Little Peckers by Netherlands-based The Vegetarian Butcher are a strong chilled nugget option for a quick dinner from the frying pan. The taste is decent, the texture is crunchy. No complaints here.

So, I was expecting something revolutionary from this eye-catching packaging. Unfortunately, Squeaky Bean did not come with a game changer (get it? Because of the Game Changers documentary) of a concept.

It’s a nugget, made of soya. Not beans. Don’t be fooled by the name. It cooks quite well, but is a latecomer to the shelves, and doesn't have enough seasoning for my liking.

I’d like to start by recognising just how many of these come in a pack. Loads! Enough for multiple portions, which is more than can be said for new on the block rivals Like Meat or Squeaky Bean - both of which I demolished in one sitting. It costs the same as its rivals too.

Read more | We review the best vegan and vegetarian sausages

These stalwarts of the vegan nugget game have been my long-time favourites, and they’re still a great option. If I had to make a criticism, it would be that I prefer a battered rather than breaded coating on my nugs.

Not even a nugget but a strip. With some seasoning, it could rival a KFC mini fillet, minus the texture of an actual, whole chicken breast. In fact, a lot of these are saved by the fact OG chicken nuggets are made of minced chicken and, frankly, not that much of it.

Though they look and taste like junk food, the seven grains claim was a stroke of marketing genius. Now I feel like I made the healthy choice. Bit pricey though.

I was so excited when these came to the UK. I’d been a huge fan of them when I’d first tried them in Germany and they do not disappoint. As the name suggests, they are very much like meat, but not. You can’t go wrong.

They have the battered coating I like. But as they’re chilled, you kind of have to plan to eat them. And I rarely plan for a nugget dinner, the nugget dinner happens to me.

While Quorn’s veggie-friendly (containing egg) nuggets are almost indistinguishable from a McNugget, the brand has really upped its vegan game. As well as Crunchy Nuggets, which are a great standard alternative to have on standby in the freezer, it now has Tex Mex flavoured nuggets too.

They're the popcorn chicken alternative I've always wanted and needed in my life. I couldn't be more grateful for flavour and seasoning.

This (French-made) nugget fully supports the stereotype that France has not embraced vegetarianism or veganism. Before trying this nugget, I thought it was impossible to do a not chicken nugget wrong. But this is it. It is entirely the wrong texture. When you bite into it and look inside, it’s the wrong colour.

It does contain organic soya and tofu though, so I suppose that counts for something. It even has veggies in it, so maybe try giving it to children who don’t know better?