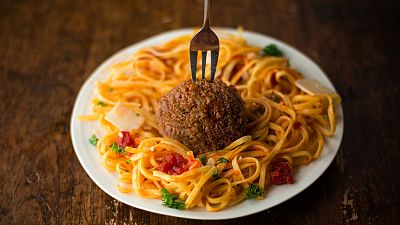 Last month, astronauts on the International Space Station had the opportunity to sample steak they'd printed on board. That didn't come from a cow. It came from a lab.

With the backlash against animal agriculture growing, resulting in surging interest in vegetarianism and veganism over the past few years. In fact, according to Google Trends data, searches for the term ‘vegan’ overtook those for ‘vegetarian’ back in 2015, and have been shooting up ever since.

But, regardless of growing interest and a trend towards reducing meat consumption, most of us just aren’t giving up on meat.

In a bid to find an eco-friendly solution, companies have sprung up all around the world aiming to grow real meat in labs. Culturing meat from cells would mean significantly less land dedicated to agricultural farming, with a 99% reduction in land use, according to Dutch brand Mosa Meat.

Read more | Do you know what's really in your veggie burger?

Meanwhile, a conventional quarter pounder hamburger requires up to 5900 litres of water to produce. Lab-grown alternatives could cut that to 236 litres, it said.

The catch is that lab-grown meat is currently a very expensive undertaking. Mosa Meat produced its first cultured hamburger in 2013 at an eyewatering cost of €250,000. So the next challenge is to bring the price down.

But just how soon will lab-grown meat be available in shops and restaurants?

Having already launched an egg-imitating mung bean product, Just is also working on a lab grown meat. Time is ticking on its launch, which it hopes to make the first commercial sale of by the end of 2019.

That’s only five weeks away!

Memphis Meats (actually based in California) claimed world firsts with its cell-based meatball in February 2016 and poultry in March 2017. Since then it has gained a host of high produle investors from Bill Gates and Richard Branson, to US poultry and protein giant Tyson.

It plans to have its first product commercially available by 2021.

This Dutch lab meat giant unveiled its first ever hamburger in 2013, and has been focused on bringing the cost down ever since, with help from investors including Google co-founder Sergey Brin.

It wants to get its first products out on the market “in the next 3-4 years”.

The Israeli tech startup was behind the steak printed and devoured by astronauts in space last month. Its first prototype was presented to the world in December 2018, but there’s no sign of it coming to shops on Earth anytime soon.