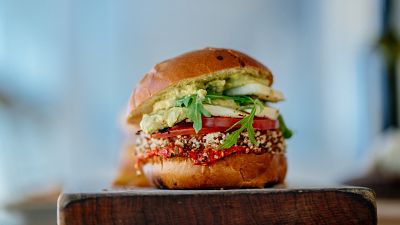 Israel has been lauded as the most vegan nation on earth, after a 2015 poll suggested 5.2% of its population had ditched animal products from their diet.

The vegan revolution taking hold in Israel has seen it become home to some of the biggest companies in alternative proteins. SuperMeat, Futuremeat, Aleph Farms are just three Israeli-based start-ups vying to produce meat sustainably – by growing it in labs.

Meanwhile, non-profit organisation Vegan Friendly is pushing to raise awareness of the environmental benefits of a plant-based diet. It’s little wonder then, that Tel Aviv has been won accolades as a top tourism destination for vegans, nor that it now plays host to what organisers claim is the “biggest vegan festival in the world”.

There was more than just food on offer at last week’s Vegan Fest. Plant-based enthusiasts were also able to find cruelty-free clothing, as well as music, yoga, lectures and other activities.

An estimated 40,000 visitors descended on the festival over three days, showcasing everything from traditional veggie food, like falafel to the latest vegan hot dogs, and kit to make your own diary-free probiotics.

“At the moment, the veganism is becoming very accessible and mainstream,” said Omri Paz, CEO and founder of Vegan Friendly, which organised the festival. “Almost everyday you have an article about veganism or health, how it has to do with plant based nutrition. So it's completely mainstream, everybody knows what veganism is."