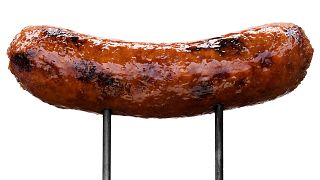 There have never been as many plant-based sausages on the market as there are today.

With the much-hyped Game Changers documentary inspiring people to cut down on meat and try a vegetarian or vegan diet, all the new choices on the market couldn't come at a better time.

But working out which is your favourite could be a time consuming and expensive effort. So we're cutting that out, by trying them for you.

I have caused waves with my opinion on the Beyond Sausage in the office. It appears to be a love it or hate it situation.

Here’s the thing, after the Beyond Burger, which is absolutely cracking (have you tried it in Byron Burger’s The Truffler?), I found the sausage equivalent a bit of a let down.

Okay, so it’s not made with soya protein like the majority on this list, but despite smearing it in ketchup, mustard and gherkins, I could not fool myself into thinking I was chowing down on even the cheapest of hotdogs. Not to mention, they come in a two-pack and are super expensive compared the rest of the market.

Richmond’s pork sausages are a mere 42% pork (plus 10% pork fat). So, a vegan sausage may not have been the most gargantuan of leaps for them.

What’s best, it tastes just like a proper Richmond sausage from your youth, although the casing does have a tendency to slip off. It goes brilliantly in a sausage sarnie, even better dipped in baked beans. It hardly makes for the most refined of meals, but I didn’t care for a second.

These are great. Rather than trying to emulate your everyday banger, these are herbed and spiced to bring the flavour of more upmarket Cumberland and Lincolnshire sausages. They do it so well.

The texture is on point, and they hold together well in a stew or for a classy sausage and mash dish. Unfortunately, being made by Quorn, they contain egg so aren’t accessible to vegans.

They resemble a sausage in look alone. Otherwise, they’re dry and have a slightly artificial taste to them, which I do not appreciate. Maybe it’s the taste of pea protein?

After the first half a sausage, I gave up. Continuing to eat them seemed like a form of self-hate. No thanks.

No red onion and rosemary here. The point of this search is to veganise the full English breakfast. Think the kind you get in Wetherspoons, a greasy spoon, almost any restaurant along the seafront of the Costa Del Sol. So, trying Linda’s plain vegetarian sausages was a revelation. They taste great; the closest I’d come in a long time to a proper sausage.

If I’d been writing this before the launch of Richmond’s veggie sausage, I’d give them full marks, but the outer texture of the Richmond trumps Linda’s. Sorry.

Were they ahead of their time? Sure. Are they vegan? No.

As such, will they keep up with the slew of competition and exciting new brands? To be honest, probably - they’ve got a giant marketing budget. But it will become more difficult in the face of increased competition.

I would give Quorn a 3/5 for its Best of British sausages alone, but its cocktail sausages are super moreish. An all-round superior sausage, deserving of an extra point.

Price: £2.50 for Best of British Sausages and £1.75 for its cocktail sausages

Very much a middle of the road sausage. It’s got a decent, uniform texture and takes on other flavours pretty well when popped into a sauce or a casserole. But this is not a breakfast sausage and probably needs a lot of condiment support if you’re relying on it to carry its own on a plate.

Fry’s has been around for a while, and in my humble opinion, it is hugely underrated.

It took a while to get hold of their sausages because I couldn’t find them in store. In the end, I opted for the Smoked Hot Dogs over the Traditional Vegan Sausages but we should take a second to appreciate the level of choice on offer here. It’s not many brands who are offering a sausage roll, hot dog

Not the best product in the Fry’s range, but by no means a bad sausage.

You couldn’t fool a sausage that these were meat. Very much a sausage for people looking to avoid replicating meat, Heck’s range of brightly coloured bangers are packed full of flavour. Albeit a not particularly meaty flavour profile, they’re certainly among the most interesting on the market right now.

Great names like Bollywood Bangers, The Beet Goes On and Super Green add to a quirky charm.

Made by the same group that make Richmond’s vegan sausage, I was expecting a lot from my Naked Glory sausage, despite the pitiful attempt at an attention-grabbing brand name.

Oh boy did they deliver on taste, though. A posh cousin to the Richmond banger, there is a strong herb combination in these that drove me to eat the whole pack. Great for barbecue season, I reckon.

This is a frankfurter to end all frankfurters. Not a soya protein isolate in sight, and it is far and away the most realistic sausage on this list.

The colour, texture and flavour are perfect. More to the point, you can’t go wrong with a near foot-long sausage. It’s feeding time.