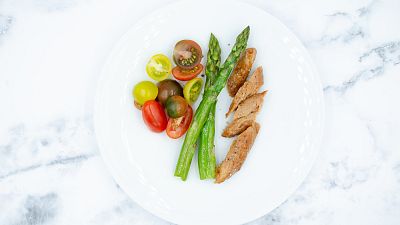 Air-based foods could be the next big food craze, according to Air Protein, a US-company claiming to be the first in the world to create a vegan meat substitute from elements found in the air.

The mock meat is made using renewable energy to transform carbon dioxide, oxygen and nitrogen into proteins rich in vitamins, and minerals. It also has similar amino acids to meat and would be organic and GMO-free, said the brand.

Developed by scientists at Kiverdi, production relies on a ‘closed loop carbon cycled’ inspired by Nasa’s attempts to produce food for a yearlong space voyage with limited resources. The cycle would see exhaled CO2 consumed by microbes, which would then produce food that people would eat, who would then exhale CO2.

The microbes, called hydrogenotrophs, would act like plants to convert carbon dioxide into food and energy.

Why do we need it?

Production would use significantly less land than animal agriculture, according to its creators. They say this will prove crucial in meeting the world’s increased food demand as the United Nation Food and Agricultural Foundation predicts farmers will need to increase food production by 70% with only 5% land increase to meet the expected growing population of 10 billion people by 2050.

The move to create this unorthodox food system came in response to current food production accounting for more than 20% of greenhouse gases, more than all of transportation combined. Meanwhile, it uses around 37% of the planet’s land mass – an area equivalent to the entirety of Africa and South America combined.

"The statistics are clear. Our current resources are under extreme strain as evidenced by the burning Amazon due to deforestation and steadily increasing droughts. We need to produce more food with a reduced dependency on land and water resources. Air-based meat addresses these resource issues and more," said Air Protein CEO, Dr. Lisa Dyson.

"The world is embracing plant-based meat and we believe air-based meat is the next evolution of the sustainably-produced food movement that will serve as one of the solutions to feeding a growing population without putting a strain on natural resources."

Air Protein’s launch onto the scene comes hot on the heels of a similar move by Finland’s Solar Foods, which claims to have created a natural protein source using water, CO2 and renewable energy that could be used to feed lab-grown meats.