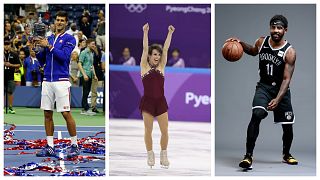 Veganism is huge, it’s everywhere, meat-imitating vegan products have even infiltrated the meat aisles in major supermarkets both sides of the Atlantic.

Elite athletes aren't immune from the trend, despite prevailing wisdom suggesting much of the protein athletes need to stay in peak physical condition should come from animal products.

Here are some of those shrugging off that notion, and smashing the boundaries of human endurance in the process.

Those you knew about...

Perhaps the most prominent of vegan athletes is Formula 1 racing driver and Lewis Hamilton. The five-time championship winner last year won PETA’s Person of the Year award for his activism on sustainability and the environment, and has gone on to become an investor in vegan fast food joint Neat Burger, just off London’s Oxford Street.

Proud vegan Patrik Baboumian is often seen promoting the plant-based lifestyle on social media since he transitioned in October 2011. The strongman continued to compete, setting his most recent world record in 2015 alongside being the face of PETA campaigns.

Roma defender and former Manchester United star Chris Smalling was reportedly inspired to go vegan by his wife. He has since become an advocate of the diet, attributing better health and reduced recovery times to his veg-heavy meals.

Vegan since 1999, Scott Jurek is still to be seen running some of the toughest trails around the world. His feats include completing the 2,200 mile Appalachian Trail in 46 days, 8 hours, and 7 minutes in 2015.

Sixteen-time grand slam champion Djokovic doesn’t describe himself as ‘vegan’. However, he admits a plant-based diet has played a significant part in his training regime, leading him to faster recoveries and better overall performance.

Former England striker Defoe is in the top 10 Premier League goal scorers of all time, and reportedly, he feels even better since going vegan. "I’ve always had energy, but sometimes you feel a little bit lethargic and bloated," he says. "Now I feel like I’ve got more energy. I feel completely different."

The elder of the Williams sisters, Venus, is outspoken about the benefits of her raw vegan diet. Since a diagnosis with a rare condition in 2011, the tennis star and seven-time grand slam winner's career slowed down significantly. However, she credits raw veganism with a huge improvement to her general health and subsequent return to sporting greatness.

Sisterly love knows no bounds. In solidarity with Venus, her younger sister Serena adopted the same diet, according to Veganuary. Now, Serena has eclipsed her sister as a winner of a whopping 23 grand slam tournaments, putting her just one title from equalling the all-time record.

If there's one person to dispel the myth that vegans are weak and weedy, it's 102kg former world heavyweight champion boxer, David Haye. He says veganism made him stronger, faster and an all-round better athlete than ever before.

Not yet an out and proud vegan, Tom Brady has attracted praise from animal rights charity PETA for his promotion (and consumption) of vegan ready meal brand Purple Carrot. He and supermodel wife Gisele Bündchen are rumoured to have ditched dairy products from their diets too.

"No more pasta, no more sugar and no meat," have been a recipe for success for Argentine international Aguero. Alongside many other footballers, including the likes of Balon D'Or winner Lionel Messi, he's at the forefront of a elite footballers prioritising veg to speed up recovery times.

Inspired by David Haye, Spanish international and Arsenal defender went vegan in 2017. He's been quoted as saying footballers have a responsibility to do what's good for the environment and lead by example.

Okay, so Tyson didn’t go vegan until he retired. But the point is, one of the most fearsome men in sport has ditched animal products, in a move that is largely seen as at odds with traditional masculinity.

American football star turned activist Colin Kaepernick has attributed his choice to switch to a vegan diet as an ethical one.

There must be something in the notion that spinach makes you stronger, because Nets star Irving is also an advocate, suggesting his superfast dribbling speed is all down to his plant-based food choices.

Seven things you didn't know you could rent on subscription