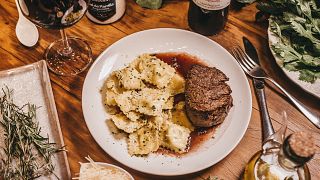 Eating without guilt is usually something diners associate with overindulgence and calorific meals. Fewer consider the environmental impact of the meal got on their plate.

But with more and more people reducing their meat intake or ditching animal byproducts altogether, the environmental cost of animal agriculture is coming to the fore. Farmed animals contribute 14.5% of human-generated greenhouse gas emissions, according to the United Nations Food and Agriculture Organization. That’s more than every car, plane, truck and train on the planet.

But what if you could continue eating meat, without the impact of your meal on Mother Earth weighing on your conscience?

It’s not about the meat

Meat eaters rejoice. Many are already aware of the possibility of offsetting carbon emissions caused resulting from plane journeys by donating to initiatives that take that same amount of carbon out of the atmosphere.

Now, there is a similar concept that allows diners to offset emissions created during growing, transporting, and cooking some of two meals per week the average Brit eats at a restaurant.

Read more | Just when will we be eating lab-grown meat?

Founder Marvin Baker had been based in South Africa when he arrived at the concept for Carbon Free Dining. Dining out at an upscale restaurant, he could see children begging on the streets through the window.

At its heart, Carbon Free Dining is not a carbon offsetting project. Its parent project, the Green Earth Appeal, was conceived as a way to kickstart local African economies and help impoverished communities to become self-sustainable. All while also promoting sustainability in Brits’ diets.

After each meal at participating restaurants, dinners are offered the option to add 99p to their bill. Each 99p gratuity collected plants a fruit tree somewhere in Africa – at the moment working alongside Ecosia, planting trees in Tanzania. Those trees are gifted to the indigenous people, who farm and tend to them.

The nurseries growing those trees ready for planting provide jobs for more than 100 people in Tanzania who may have otherwise struggled to find employment. Meanwhile, it provides an opportunity to take what they have learned about horticulture to use in other areas and allows them the opportunity to sell on saplings.

The need for such a scheme is becoming ever clearer, with farming coming under fire from consumers and media demanding an urgent reaction to climate change. BBC documentary Meat: A Threat to our Planet? caused uproar among British farmers, who insist their farms are among the greenest in the world.

Nevertheless, red meats and cheese are among the worst offenders for CO2 emissions worldwide/ One study suggested up to 39kg of CO2 was produced per kg of lamb meat. Of that, more than 35kg is produced at farm level.

“Best estimates suggest 27kg of CO2 is produced per kilo of beef we consume,” says Richard Dickson, director of global partnerships at Carbon Free Dining. “Each of the fruit trees we plant takes 25kg of carbon out of the atmosphere per year. Over its 40-year lifetime, it’ll remove a tonne of carbon dioxide from the air.”

There’s no waiting around either. “Within a month of each contribution, there’s a tree in the ground,” Dickson adds.

The reality is that few diners are brave enough to take on a kilogram steak at dinner – 1kg is equivalent to four average-sized steaks - meaning the vast majority of contributions and the scheme overall has resulted in a more carbon extracted from the environment than participating meals have contributed.

The nature of the project means Green Earth Appeal and Carbon Free Dining will leave communities after 3-5 years, allowing locals continue the businesses they’ve built around the project without interference.

So far, the mission has resulted in more than 500,000 trees planted in Tanzania with plans for up to a million more over the next year.

Top chefs including Marco Pierre White and James Martin have signed their restaurants up to the scheme, but it’s not just limited to traditional British cuisine. Restaurants as far afield as Arkansas, USA and The Maldives have taken up the mantle and decided to offer their customers the option to cut carbon.

Though the carbon footprint of a vegan meal is likely lower than its meat equivalent, pioneering plant-based restaurant V-Rev has also taken up the challenge, itself contributing 50,000 trees.

At the rate Carbon Free Dining is growing, combined with people becoming more mindful of the meat consumption, the future of eating looks brighter than it has for a while.