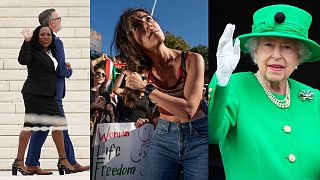 Dictionary.com has announced ‘woman’ as its Word of the Year 2022, in reference to the voracious debate over gender in politics and public life in the US and beyond.

Dictionary.com said the site had experienced a noticeable increase of people looking for the definition of ‘woman,’ which at its height surged by 1,400 per cent.

“This year, searches for the word woman on Dictionary.com spiked significantly multiple times in relation to separate high-profile events,” wrote Dictionary.com on their website.

“Our selection of woman as our 2022 Word of the Year reflects how the intersection of gender, identity, and language dominates the current cultural conversation and shapes much of our work as a dictionary.”

The site lists the definition of ‘woman’ as an ‘an adult female person’.

“It was a rare case of not just a word in the spotlight, but a definition. We at Dictionary.com weren’t the only ones to take notice,” they continued.

Other candidates for Dictionary.com’s word of the year 2022 included the Ukraine flag emoji, ‘quiet quitting,’ ‘Wordle,’ ‘democracy,’ and ‘inflation’.

Dictionary.com assessed that the increase in searches - a rarity for such a common word - was linked to the confirmation hearing of Judge Ketanji Brown Jackson, who in April became the first Black woman to be confirmed as a US Supreme Court justice.

“Can you provide a definition for the word woman?” Senator Marsha Blackburn asked at Jackson’s hearing in reference to the nominee’s views on transgender people.

Further surges happened in May, June and July in relation to the Supreme Court’s decision to overturn Roe Vs Wade.

Other world events that relate to women pinpointed by the site include the death of Queen Elizabeth II, the ongoing women-led protests in Iran following the death of 22-year-old Masha Amini, and Serena William’s decision to step away from her tennis career.

Subjects such as gender based violence, sexual harassment, and the toxic row over transgender rights have dominated politics in the both the US and Europe in recent years.

Just this week, French first lady Brigitte Macron caused a stir when she waded into a debate on “inclusive language” in France. Meanwhile, ongoing controversies surrounding JK Rowling mean the Harry Potter author is rarely out of the headlines.