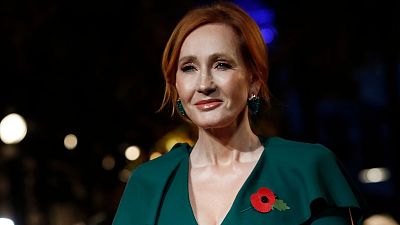 There's mounting criticism against the Harry Potter creator for her views on trans people   -   Copyright  AP
By Shannon McDonagh  with AFP  •  Updated: 06/01/2022

An English school has renamed one of its buildings originally honouring Harry Potter author JK Rowling due to her "opinions on trans people".

The change took place following requests from a number of students and staff members in light of a growing number of disputes against Rowling for her “recent words about the trans community”.

The Boswells School in Chelmsford, England, has changed the name of her building to Holmes – now recognising British olympian Dame Kelly Holmes.

Principal Stephen Mansell explained that his school for 11-18 year-olds wanted to create "a vibrant, inclusive and democratic school community, where we encourage students to become independent and confident citizens."

"In the autumn of 2021, we revised and renamed one of the school buildings following numerous requests from students and staff, as well as a vote from the whole school," he continued.

The start of this year has been headline-filled for Rowling

A school newsletter from July said its six buildings were named after "British citizens who excelled".

Rowling has already had a controversial start to 2022 following this and her absence from the HBO Harry Potter reunion special.

The snub allegedly came as a result of cast members – many of whom support or are patrons of LGBTQ+ causes – expressing resistance to her being present.

Instead, archive footage of the 56-year old – estimated to be worth just shy of a billion euros – was taken from a 2019 interview discussing the franchise.

In 2020, JK Rowling shared an article on Twitter about "people who menstruate" commenting sarcastically: "I’m sure there used to be a word for those people. Someone help me out. Wumben? Wimpund? Woomud?”

Members of the LGBTQ+ community defended this phrasing because transgender men can have their period and transgender women cannot.

She spent the following year detailing her discomfort with the distinction, suggesting that being around a trans female would not stop her feeling "vulnerable to male violence".

War is Peace.
Freedom is Slavery.
Ignorance is Strength.
The Penised Individual Who Raped You Is a Woman.https://t.co/SyxFnnboM1

The status of trans people has been the subject of tense debate in recent years in the United Kingdom.

Much like the nation's divisions, Rowling's heated Twitter audience is now comprised of a mix of people that believe she is either doing serious damage to trans people and their long fight for equality, or drawing attention to biological differences between sexes.

Rowling's replacement, 51-year-old Dame Kelly Holmes, was not asked in advance about having a house named after her.

"I am always honoured when a school names a house after me... I hope my name represents determination, strength in adversity and a never-give-up attitude," she said.

Holmes also used her statement to defend Rowling's status as a "brilliant" author.

"JK Rowling is a brilliant, world-renowned author and should be credited for all the good she has done in the literature world to help young people, in particular, have vision, creativity, dreams and much more."