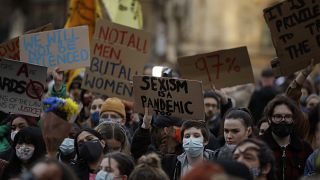 Protesters in London in 2021 called on the British government to do more to protect women, after the murder of Sarah Everard.   -   Copyright  Matt Dunham/Copyright 2021 The AP. All rights reserved
By Anca Ulea  •  Updated: 12/12/2022

After years of campaigning by women’s rights groups, the British government has backed a law that will criminalise sexual harassment in the streets.

The bill would introduce a specific offence for public sexual harassment, which is already illegal in the UK.

It will also increase the penalty for perpetrators who deliberately harass, alarm or distress someone in a public space due to the victim’s sex - raising the maximum sentence from six months to two years.

The goal is to encourage victims and bystanders to report offences to the police, according to a statement the government issued Friday.

“Every woman should feel safe to walk our streets without fear of harassment or violence,” Home Secretary Suella Braverman said in the statement. “We are putting the needs of victims at the heart of our decision, which will mean the criminals who commit these acts face the consequences they deserve”.

What actions are covered under the law?

The legislation will criminalise acts including:

But the bill’s sponsor, lawmaker Greg Clark, says the wider goal is a shift in British culture when it comes to the way women are treated.

Clark was quoted by the BBC as saying the bill’s intention is to “reinforce a change in the culture that establishes that it is completely unacceptable to abuse women in the streets".

The Conservative party holds a large majority in Parliament, which means the law will likely be passed.

Public sexual harassment: A major problem in the UK

Outrage over public sexual harassment in the UK came to a head last year after the murder of 33-year-old Sarah Everard, who was abducted, raped and killed by a Metropolitan police officer while walking home.

Everard’s murder set off a wave of protests calling for police reform and increased protections for women. It also raised awareness of the dangers women face when alone in public spaces.

But an overwhelming majority of these incidents – over 95 per cent – never get reported, mostly because women don’t consider them “serious enough” or don’t think reporting will help.

UN Women UK said that in order to get women to report these offences, the system needs to be reformed and public trust in it needs to be re-established.

Charities and rights groups in the UK have been putting pressure on the government to make changes to the existing law for years, claiming it was "fragmented, incomplete and disjointed".

Plan International UK, a children's charity that focuses on girls' rights, had garnered more than 65,000 signatures for its #CrimeNotCompliment campaign.

EU countries like France and Belgium have already passed laws criminalising sexual harassment in the streets, with spot fines and jail time for perpetrators.

France’s 2018 law criminalised verbal sexual harassment on the street, and allowed officers to issue fines to perpetrators on the spot.

Four years later, the police have recorded at least 4,700 incidents of sexual harassment thanks to the law.

But that number is still a drop in the ocean - a recent poll found that 81 per cent of French women have experienced street harassment and only around 2 per cent report it.

Women’s rights organisations in France also say there is still much work left to be done to deconstruct "rape culture".

Last month, they called for a nationwide protest on the International Day for the Elimination of Violence Against Women, demanding more legal protections for women.

Man jailed for slap on bottom