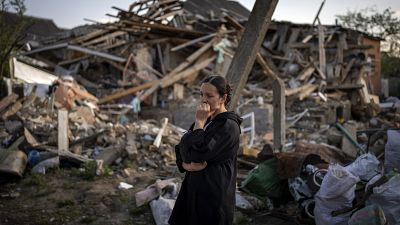 Collins Dictionary have announced their word of the year, with ‘permacrisis’ topping a list dominated by grim world events.

‘Permacrisis,’ a term that describes ‘an extended period of instability and insecurity’ won first place due to the multiple crises enveloping the UK and the world in 2022. This list includes climate change, inflation, multiple political debacles in Westminster, and the war in Ukraine.

Whereas last year Collins’s list was dominated by zeitgeist and pop culture words like NFT, cheugy, and regencycore, this year’s list reflects the darker tone of 2022.

Kyiv, the capital of Ukraine, makes the list after Russia’s invasion which has been ongoing since February. The Ukrainian spelling of ‘Kyiv,’ as opposed to the Russified ‘Kiev,’ became common parlance after the war began and global support for Ukraine and the country's culture swelled in the face of denials of its distinct heritage from Moscow.

‘Partygate’ is another crisis term on the list and refers to the scandals which brought down British Prime Minister Boris Johnson. Defined as “a political scandal over social gatherings held in British government offices during 2020 and 2021 in defiance of the public-health restrictions that prevailed at the time” by Collins, the revelations about lockdown wrongdoing dominated British political life for months, causing further instability in the embattled nation.

Further pertaining to tragedy in British public life, ‘Carolean’ made the list. After the death of corgi-enthusiast and style icon Queen Elizabeth II the island nation was plunged into mourning. Now the country can look forward to a new era with a new face gracing stamps, coins, and waving from a gold coach. Get ready for the reign of King Charles III.

In another reflection of the bleakness of 2022 ‘warm bank,’ meaning “a heated building where people who cannot afford to heat their own homes may go,” made Collins’s list. With prices for wholesale gas already on the rise after the COVID-19 pandemic, the energy bills problem has been compounded by events in Ukraine and sanctions on major gas-provider Russia.

On a lighter note, ‘splooting’ and ‘vibe shift’ both made the Collins cut. Splooting is the act of lying flat out on one’s stomach with legs spread as an animal does to cool down. The word has found new resonance given the summer heatwaves experienced around the world.

Meanwhile, ‘vibe shift’ refers to “a significant change in a prevailing cultural atmosphere or trend.” Shifts in the public mood and the cultural zeitgeist now happen daily thanks to a 24-hour news cycle and microtrends encouraged by apps like TikTok.

Finally ‘lawfare,’ ‘sportwashing,’ and ‘quiet quitting’ all made this year’s list. Sportwashing, the promotion of a sporting activity to distract from controversy has been frequently used to describe the upcoming football World Cup in Qatar and was also an accusation levelled by human rights campaigners at Beijing during the Winter Olympics.

‘Lawfare’ the “strategic use of legal proceedings to intimidate or hinder an opponent” has featured heavily in debates on free speech amid a number of high-profile cases of journalists being sued by Russian, Middle Eastern, and central Asian businessmen after damaging revelations made about them in the media.

Quiet quitting - the practice of doing no more work than one is contractually obliged to do - has taken the world by storm. With differing opinions on whether it’s pandemic burnout or stagnant wages, the era of leaning in appears to be over and Collins agrees.

Watch: Ukrainians make 'trench candles’ for soldiers at the front

Which new words have made it into the latest English dictionary?