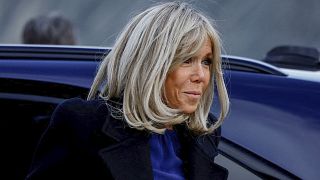 Brigitte Macron has spoken out against the use of gender neutral words in the French language amidst a burgeoning culture war in France   -  Copyright  Sarah Meyssonnier/
By Tim Gallagher  •  Updated: 14/12/2022

France's first lady Brigitte Macron has drawn praise and criticism for speaking out against the use of gender neutral pronouns in the country.

The 69-year-old, who formerly taught literature, made the remarks in reference to the practice of neutralising the famously-binary French language which, in common with other romantic languages, has masculine and feminine words.

The practice has been adopted by some local French administrations including the Parisian council as well as elite academic institutions like the Sorbonne.

Mrs Macron, who met her now husband and France's President Emmanuel Macron when she was his secondary school teacher, used the interview to disparage “inclusive writing” claiming to speak for the “silent majority” in France.

This is the second time the French first lady has spoken on the issue, previously criticising Robert dictionary for listing the gender neutral pronoun “iel” an alternative to masculine “il” and feminine “elle”.

“The language is beautiful. And two pronouns are fine,” she said at the time.

Mrs Macron was also embroiled in a gender-related controversy in 2021 when she went to court over a conspiracy theory that she was born a man named Jean Michel Trogneux.

What is happening with gender neutral language in France?

In the anglophone world, transgender rights, non-binary people, and gender neutral language and toilets have long been a culture war talking point for both right and left alike, but the issue is relatively new to France.

In English, the gender-neutral pronoun 'they' is used for non-binary folks but existed linguistically as a neutral term for a group of people prior to this. In French, which is separated into masculine and feminine words with masculine as the dominant form, this is not the case.

There have been moves in France to create feminine versions of masculine words to balance the scales of centuries of male domination by creating feminine alternatives for high ranking professions traditionally carried out by men. For example, the male word for author, ‘un auteur’ has a female counterpart in ‘une autrice’.

There are also moves to use gender neutral terms instead of their traditional masculine alternatives as the benchmark of language, such as saying “être humains” instead of “hommes” or “the human beings” instead of “men”.

However, recent developments have seen the addition of a suffix in the feminine “-e” and plural “-s” to masculine words to neutralise them - for example turning “cher lecteur,” or "dear reader", into “Cher·e·s lecteur·rice·s”.

Other gender neutral pronouns in circulation include “ol,” “ul” and “yul”.

What has the reaction in France been?

Attitudes to this project in a country so reverential of its history and culture have been predictably mixed.

Brigitte Macron was far from the only one shocked by “Cher·e·s lecteur·rice·s” with the official guardians of the French language, the Academie Française, expressing dismay at the perceived importation of American pretensions to France.

‘Le wokeisme’ is not as firmly embedded in the French lexicon as it is in places like the UK and the US but now that gender issues are on the agenda both sides are coalescing around the respective rallying points.

Last summer, Le Planning Familial, a family planning organisation, attracted controversy when it ran a transgender equality communications campaign. At that time Laurie Lavalette, a deputy of Marine Le Pen, spoke out against “highly subsidised activists who seek to spread a grotesque and mendacious ideology.”

More recently a ballroom dance instructor at the Institute of Political Studies (IEP) in Paris was fired after students complained she made them feel uncomfortable by asking them to separate into pairs of men and women.

Mrs Macron was supported in her remarks by education minister Pap Ndiaye, a progressive, who told radio station France-Info: “She is a former literature teacher, so she is a veteran. I exchange ideas with her regularly on many subjects.”