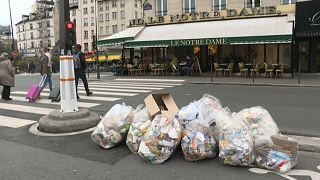 There is another strike in the French capital. But this one stinks.

After suffering with the trains, hospitals and schools closures, now rubbish collection is being affected. Mountains of garbage are piling up after 12 days of strike action. But it is not the collectors who are striking, but the workers at the capital's incinerators.

A foul smell is spreading across the Paris, killing the vibe at sight-seeing tourist attractions like the world-famous Champs-Élysées. Local residents are worried about the sanitary implications of this latest stoppage.

Joël Bonnet lives in Paris and thinks other European capitals deal better with situations like this:

”It's frankly disgusting! It's ugly, it's unhealthy, and when compared to other capitals, it's rare to see nightmare situations like this."

Catherine Lemoine is another Parisian, unhappy with the latest strike action:

Watch Euronews’ Ryan Thompson full report from the streets of Paris in the player above.