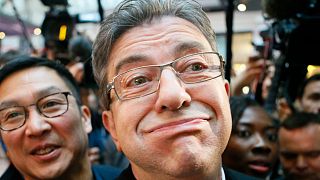 French voters will head to the polls once again this weekend in parliamentary elections that could define just how difficult it may be for Emmanuel Macron to govern over the next five years, says Euronews' international correspondent Anelise Borges.

Macron, who was re-elected as French president back in April, has continued to campaign in order to secure enough seats in parliament for members of his political movement so that he can pass some of the ambitious reforms he envisages in order to strengthen the French economy, like, for example, changes to the pension system and tax cuts.

Emmanuel Macron has asked his supporters to avoid the disorder that a minority government or a coalition government would bring.

But of course, the surprise element could come from the far-left after Jean-Luc Mélenchon, the leader of that movement, gained 22% of the vote in the first round of the presidential election back in April.

Mélenchon has been asking his supporters to force Emmanuel Macron to get him as prime minister symbolically, of course, by choosing enough members of his political movement to join the government in the lower house and help shape French policy in the years to come.