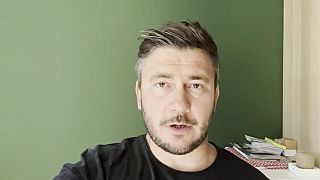 The acclaimed Russian novelist and commentator Dmitri Glukovsky has said he won't be silenced by Moscow after Russian authorities placed him on a wanted list.

He was condemned by Russian authorities for speaking out against the war in Ukraine.

In a video statement to Euronews, for whom he used to work, Glukovsky repeated his criticism of the Kremlin and demanded a withdrawal of Russian troops from Ukraine.

"The article I am accused of and wanted for is called an article on discrediting the Russian army, but, in fact, it is an article on military censorship and the political persecution of the pacifists in Russia. Any opinion that differs from the information and position of Russian propaganda is declared illegal, and those who dare to voice it face up to 15 years in prison.

"The Instagram post for which I am accused of discrediting the army goes like this: 'No to the war in Ukraine. Admit that this is a real war against the entire Ukrainian people and stop it'.

"Regardless of what I am accused of, I am ready to fully repeat these words: 'I demand an immediate cessation of hostilities in Ukraine and the withdrawal of Russian troops from it'."

Since invading Ukraine in February, Moscow has intensified its crackdown on dissent, targeting public protests, critical media and opposition figures.