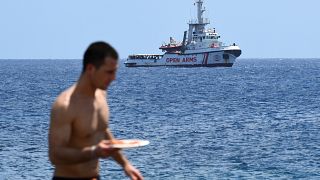 Italian Prime Minister Giseuppe Conte has announced a deal has been made to send all the migrants on board Spanish NGO rescue ship Open Arms to six European countries; France, Germany, Romania, Portugal, Spain and Luxembourg.

The boat is currently in Italian waters near the island of Lampedusa.

The vessel has spent 13 days at sea after Deputy Prime Minister Matteo Salvini issued a decree banning the ship saying it was necessary to protect public order.

It headed towards port after a court in Rome suspended the decree but says they will not try to enter the port without explicit permission - as another rescue ship, the Sea Watch 3, did in June. That ended in the arrest of the ship's captain.

Salvini has denounced the court's decision, vowing to continue to refuse permission for the ship to dock.

Salvini attempted to force through an another emergency order to block the boat entering the port in Lampedusa but the defence minister, who is a member of their coalition partner party the Five Star Movement, refused to sign the order.

Openly challenging the Lega leader, who has so far dictated Italy’s immigration policy, Elisabetta Trenta said defying the court was illegal and that “politics must not lose its humanity.”

Conte wrote an open letter to Salvini, saying the migrants, who were picked up off the coast of Libya in early August, will be share out between France, Germany, Romania, Portugal, Spain and Luxembourg.

Conte's intervention comes amid another government crisis after Salvini announced he wants to end the coalition government between his Lega party and Conte's Five Star Movement and call a snap election.

Meanwhile the head of the Open Arms charity organisation has said its namesake rescue ship in the Mediterranean Sea needs an emergency medical evacuation.

Open Arms' Head Of Mission Ricardo Gatti told Euronews that the migrants desperately need to be allowed to disembark:

"There are really critical conditions onboard as reported by our medical and psychological team, so we asked for permission to enter the national waters.

"Actually, now he have to ask again for permission to disembark.

"We are sure that they will allow people to disembark, because the wellbeing of the people is critical and medical evacuation is needed.

"If they don't allow it, it makes it a very difficult situation for the Italian government.

"They are in a very bad condition; they were already coming from a bad situation in Libya and psychologically they are also in a risky situation."

READ MORE on the decision to oppose Salvini's decree