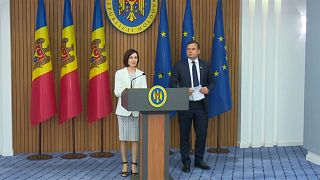 Moldova’s new Prime Minister Maia Sindu will seek closer ties with the European Union and has vowed to combat corruption in the country.

Sindu has finally taken office after the outgoing Democratic Party failed to hand over power or recognise her new coalition government as legitimate.

The crisis shook the country as the two rival parties fought for control.

READ MORE: How did the crisis unfold?

Departing Prime Minister Pavel Filip stepped down last Friday but demanded a snap election straight away, calling Sindu’s government illegal. Leaders of the Democratic Party have reportedly left Moldova since. But New Prime Minister Sandu has said they will face justice. In her initial moments in office, Sandu told a televised briefing: “I have a message for the entire world. Moldova is finally free.” She went on to say her government will fight corruption, sack dishonest officials, make the electoral system fairer and "get foreign aid flowing".

To form a ruling coalition, Sindu had to join forces with the Socialist Party of President Igor Dodon.

But the Socialist Party wants closer ties with Russia while Sindu announced her government will seek closer relations with the EU: “This is not a natural alliance. There is no question about it, and probably half a year ago nobody would have said that this could happen” the new prime minister said.

Alison Mutler is a journalist who has been following this political crisis closely and she thinks it is not over just yet. She said that there are many people who still support the old regime of the Democratic Party in positions of power in Moldova. And “this is a very unusual alliance”. She went on to say a sustained effort from international players like Russia, the United States, and the EU “would need to happen” for Moldova to move forward.

Harvard-educated former World Bank economist Maia Sandu joined politics in 2012 as an education minister, where she became well known for her efforts to clamp down on widespread cheating during exams. Tackling corruption on a national scale would likely prove popular, even if hard to achieve, as it is said to be one of the voters’ biggest concerns.