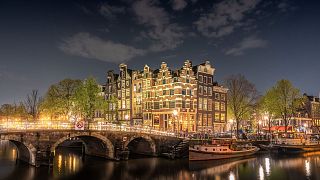 With an estimated 1 billion people around the world living with some form of disability, accessibility is a hugely important issue.   -   Copyright  Canva
By Nicole Lin Chang  •  Updated: 17/11/2022

With an estimated 1 billion people around the world living with some form of disability, accessibility is a hugely important issue - not least for the tourism sector.

A new report has revealed the top 10 most accessible cities in the world, as nominated by 3,500 people with disabilities.

They rated cities based on transport links, proximity of accommodation to attractions, shops, and restaurants, and the availability of information about accessibility.

The survey, from business collective Valuable 500, was conducted in September 2022, and involved participants from the United Kingdom, United States, Japan, China and Australia.

All of the people who took part self-identified as having a disability.

No city can claim to be fully accessible, says Valuable 500 - but it is worth highlighting those making efforts to cater to the needs of disabled travellers.

With that in mind, here are the cities that made the cut:

In the Netherlands, equal treatment is considered so important that it is enshrined in Article 1 of the country’s constitution, which forbids discrimination on any grounds including disability or chronic illness, says the report.

Almost all of the city’s main tourist attractions are accessible (with the exception of the Anne Frank House and Rembrandt’s 17th-century home), and it is even possible to take a wheelchair-accessible canal cruise.

The city also won points for its accessible public transport system, including an extensive network of bike lanes, which wheelchair users also make use of - you can even rent an adapted bike, including one that can incorporate a wheelchair.

Tourism accounts for a fifth of Las Vegas’ GDP, making it a top priority for the gambling capital of the world.

But what’s startling about Las Vegas’ travel scene is the sheer number of accessible hotel rooms on offer, says the Valuable 500 report. Some hotels offer hundreds of accessible rooms, across all price brackets and room types, including the city’s famed themed rooms and suites.

Casinos and showrooms are completely wheelchair accessible, and equipped with assistive technology for deaf and hard of hearing visitors. And the famous Las Vegas Strip - lined with resort hotels and casinos - is described by the report as a “breeze” to get around, with smooth wide pavements, pedestrian crossings equipped with visual and audio signals, and elevated walkways to cross the street serviced by lifts.

Survey respondents praise London’s generally accessible transport links as well as the accessibility of the city’s museums and other cultural attractions.

Access to information was singled out by the report as particularly noteworthy. VisitLondon’s Accessible London page has a wealth of information for disabled visitors, and AccessAble provides a professionally audited, searchable database of detailed access guides to attractions, hotels, shops and restaurants, among other venues.

One thing the report flagged was the city’s Tube system - only about a third of Tube stations have step-free access. However all buses are wheelchair accessible, as are all tram stops and most ferry piers.

Almost a million people living in New York City identify as having a disability, and the city hosts six million visitors with a disability every year, says the report.

This has driven authorities to strive to make New York one of the most accessible cities in the world, facilitating initiatives like Link-NYC, which has replaced pay phones with kiosks equipped with free Wi-Fi, phone calls, a tablet for maps and city services, and device charging.

Where New York doesn’t score so well is in the accessibility of its subway, which is one of the world’s oldest. Currently, only about 29 per cent of the city’s 472 subway stations are accessible to some extent.

When people think of Orlando, Disney World is probably what comes to mind - and Orlando is frequently ranked as one of the most accessible US cities, in no small part because theme parks set the bar high, notes the report.

Disney theme parks are renowned for their commitment to inclusivity, accommodating not just wheelchair users, but visitors with vision, hearing, cognitive and sensory disabilities too.

The City of Light has long been one of the top tourist destinations in the world, but winning hosting rights to the 2024 Olympic Games has provided further impetus for the city to become more accessible, indicates the report.

In the lead up to the 2024 Games, Paris is creating 15 accessible pilot districts around Olympic and Paralympic sites, and enhancing access to public spaces, hotels, services, shops and more.

Like other cities on this list, Paris doesn’t do well on metro/subway transport - the Paris Metro is largely inaccessible for wheelchair users, but buses, ferries and overground trains provide alternatives.

Entry to many museums, including the Louvre, is free to people with disabilities. And the report also provides a handy tip: Wheelchair users and their companions can jump the queue and the barrier to sit directly in front of the Mona Lisa.

Much of Shanghai’s development has happened in recent years, meaning that its infrastructure is relatively new - pavements are generally in good condition, with plenty of kerb cuts and tactile ground surface indicators leading to pedestrian crossings and lifts, says the report.

It points out that Shanghai has the largest metro network of any city in the world, with 459 stations and 772km of track catering to an average of 9.5 million passengers per day, and it’s fully accessible for wheelchair users, although street-level lifts can be hard to find.

And because they are mostly new, many of Shanghai’s tourist attractions are at least partially accessible.

But one big point of improvement is availability of information. Shanghai’s official travel page doesn’t make a single mention of accessibility, highlights the report, making finding information about accessibility virtually impossible, at least for foreigners.

Singapore’s ageing population is “the main impetus” for its accessibility, according to the report, with 95 per cent of pedestrian walkways, taxi stands and bus shelters accessible to wheelchair users, older people and travellers with sensory disabilities.

The city-state has implemented a universal barrier-free accessibility code to cater for the needsnot just of wheelchair users, but also people with vision or hearing loss or other disabilities, it adds.

Unlike many other major cities, the mass rapid transit system (Singapore’s metro system) is fully wheelchair accessible; wheelchair users are not reliant on ramps but are able to board the train independently.

The vast majority of tourist attractions are accessible to disabled people, including the famous Gardens by the Bay complex, which also provides a free shuttle service for wheelchair users and wheelchair rental.

Forty-five per cent of survey respondents chose Sydney because of its wide variety of accessible accommodation close to cultural attractions, shops and restaurants, says Valuable 500.

Sydney Airport has also launched a partnership with Aira, a service that enables blind and low-vision travellers to navigate the airport using their smartphone.

Tokyo won the bid to host the Olympics and Paralympics in 2013, and Japan ratified the Convention on the Rights of Persons with Disabilities the following year.

The report details how the country’s Basic Act for Persons with Disabilities has led to measures guaranteeing access to public facilities, transportation and information.

Tactile ground surface indicators, which were invented in Japan, are ubiquitous, and nearly all train and subway stations in Tokyo are wheelchair accessible. There is also the Tokyo Disneyland theme park, where accessibility is baked into the design.

But the report points out that lack of space in Tokyo means that stores and restaurants are often cramped and/or have steps to enter, making wheelchair navigation difficult.

Thinking of moving to Italy? Don't make these mistakes