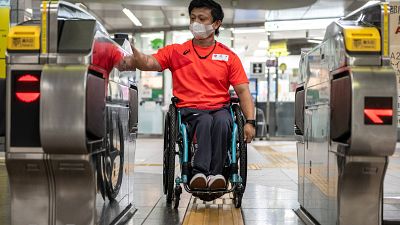 The European Union wants more of us to travel by train. The bloc went as far as to name this year the European Year of Rail, aiming to boost trains' 7 per cent share of passenger journeys in Europe.

But train travel isn't always a convenient option for everyone. In Paris, 90 per cent of RER commuter rail stations are wheelchair accessible but wheelchair users cannot get on or off trains without staff assistance.

One railway operator in Japan believes it has found a solution, installing an automated ramp that it says can help bridge the gap between the train and the platform.

As a train pulls into the station, sensors automatically deploy the ramp, filling the gap and creating a level boarding option for wheelchair users and people with pushchairs.

Rail company JR West said it was carrying out a trial at a station in Osaka, Japan's third-largest city, before rolling the technology out more widely.

But while JR West believes the smart ramp could help people with reduced mobility commute more independently, not everyone is convinced.

"This is a solution that has been trialled in different guises for years, but it has never found widespread application, and this is chiefly because it is introducing a point of failure where there previously was not one," railway engineer and writer Gareth Dennis told Euronews Next.

But there's a bigger problem with the ramp, which Dennis calls an "accessibility by exception" solution.

"[It's] a bit like adding stair lifts to buildings, rather than just designing them to be accessible in the first place".

"We should be designing our transport systems to work for everyone by design, not by exception," he said.

It's a point of view that Mher Hakobyan, accessibility officer for the European Disability Forum, agrees with.

"Digital solutions can of course help reach accessibility objectives but large scale structural changes are fundamental," he told Euronews Next.

European law has some significant gaps when it comes to tackling accessibility issues for people with disabilities.

For example, there is no common rule standardising level entry requirements that would allow wheelchair users to independently board trains in the EU, Hakobyan explained.

"There is also no EU law with binding obligations regarding accessibility of the built environment in general".

"This is a big shortcoming, as you might not even be able to get to your desired transport, if the physical environment leading to and around it is not accessible for you," he said.

The risks posed by the gap between the train and the platform can be serious. In the United Kingdom, "platform train interface" (PTI) incidents contribute the equivalent of around 13 fatalities and weighted injuries (a rail industry method of measuring risk to passengers on the network) every year, according to figures from industry body the Rail Safety and Standards Board.

We need harmonised and co-ordinated action across the EU

"It's the largest risk on the railway by an order of magnitude, and it's the only one that's not getting better," rail engineer Dennis told Euronews Next.

It's an expensive option, but not impossible. UK train operator Merseyrail had over 50 of its platforms upgraded after a fatal accident in 2011 caused the death of a 16-year-old passenger who fell in between a train and the platform.

"They enacted a rolling programme of platform corrections and procured a train that fits the infrastructure properly," Dennis said.

For Hakobyan, the scale of the issue shows why technological solutions like JR West's automated ramp are at best a sticking plaster on a much bigger problem.

"In order to achieve systematic and fundamental improvement of transport access by persons with disabilities in Europe, we need political commitment supported by legal and financial measures".

"We cannot rely on ad hoc measures by certain companies or local authorities. We need harmonised and co-ordinated action across the EU," he said.