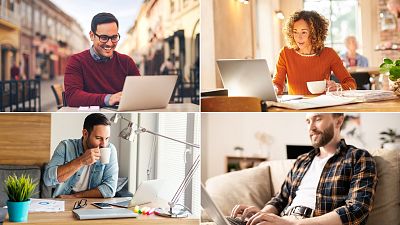 A new study has ranked the greenest cities in the world to work in, with five out of ten in Europe.

Research by British Business Energy used several, specific measures to rank cities across the globe and determined the most eco-friendly locations to work.

While Amsterdam does have a reputation for environmental living, other cities like Frankfurt are not as well-known for their green credentials.

To obtain the results, criteria included what percentage of people walked or cycled on their commute, renewable energy usage, patents for environmental tech and the number of vegan or vegetarian restaurants located in each city.

The five greenest cities in Europe

The study named London as the number one most eco-friendly city for workers. It had the fourth-highest number of commuters walking or cycling to work at nearly 30 per cent.

The British capital also has its very own Greenground Map for exploring green spaces.

London had the most vegan or vegetarian places to eat with 3,709 restaurants offering options for the climate-conscious. That’s more than twice as many as its closest competitor, New York. And, when it comes to innovation, over 10 per cent of all patents in the UK were environmentally related too.

“Now more than ever it’s important to be conscious of our carbon footprints, and with many people on the same wavelength, it’s great to see London pioneering this movement for everyday workers,” says Ian Wright, founder of British Business Energy.

“It sets a bar for countries worldwide and what we can be doing more of to keep our planet clean.”

Frankfurt came in second with a strong focus on technology. Just over 11 per cent of all registered new inventions were for eco-tech.

Additionally, roughly 46 per cent of the city’s energy comes from renewable sources with targets set to have all of its energy requirements met renewables by 2050.

Over 20 per cent of Frankfurt’s surface area is covered by trees.

The largest inner city forest in Germany, the Stadtwalt, can be found in Frankfurt and about half of the urban area consists of natural landscapes in various other forms.

Norway is leading the way in renewable energy use. Over 97 per cent of the energy produced in the country is renewable, a figure that is miles ahead of its nearest European competitors. It is also literally the greenest city on the list, as 28 per cent of land is covered by trees.

Oslo is surrounded by the Marka Forest, a nationally protected area where development is mostly prohibited. Despite many of Oslo’s residents using the green space for recreation, a wide variety of species call the forest home, including lynx, wolves and beavers.

In 2019, Oslo was named as the European Green Capital by the European Commission with top scores for air quality and protection of forests and biodiversity.

Amsterdam is perhaps best known for being a cycling-friendly city.

It was Europe’s top performing city for commuters choosing to get to work by pedal or foot power, as nearly 60 per cent of people walk or take their bike.

With 1,429 vegetarian or vegan lunch options for city workers, Paris is the second best city in Europe for sustainable food choices.

Although currently, only 24 per cent of commuters walk or cycle, this could be set to change as Mayor Anne Hidalgo has laid out an ambitious plan to encourage people to use alternative forms of transport.

What's more, the iconic Champs-Élysées avenue is soon to be turned into an 'extraordinary garden.'

By closing busy, car-filled roads to make space for cyclists and pedestrians, Paris could soon see more people switching up their choices of daily transport.