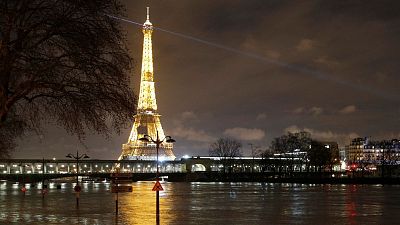 Thousands of Olympic athletes on boats cruising along the River Seine toward the sun setting like a giant gold medal behind the Eiffel Tower.

The 2024 Paris Games opening ceremony vision was unveiled on Monday as an event organisers hope will be unique in Olympic history and free for hundreds of thousands to watch on the riverside.

"This river will be the waterway where the athletes will parade. 160 boats will welcome the 206 athletes' delegations - there will be 10,500 athletes who will have the chance to parade on the Seine," explains Tony Estanguet, Paris 2024 Organising Committee President.

More than 600,000 spectators are expected to line six-kilometer route.

Rethinking the ceremony that announces an Olympics to the world by taking it outside the traditional stadium setting was long hinted at by Paris officials.

Details revealed for the July 26th 2024 show help explain a promise to use the City of Light, its culture and people as essential actors in the Olympics.

For starters, the water-borne opening ceremony will innovate by having the parade of athletes from more than 200 teams begin the evening instead of end it.

“We want them to really enjoy this moment and in a way be the actors of the show,” said Estanguet, a four-time Olympian and three-time gold medalist in canoe slalom.

His understanding of demands made on Olympic athletes has helped shape what he hopes will be a better experience for the thousands of athletes in attendance.

Gone will be the typical opening ceremony experience of standing around outside a stadium, marching into it, then more standing until about midnight. This has historically put off athletes who start competing the next day.

Estanguet also asserted a focus on making the Games harmonious with the targets of the Paris Climate Agreement, given they will take place in its birthplace.

"We will discover again La Seine. Because it will be sanitised, clean. It will be also a space that will be given back to the citizens so that they can swim after we gave back the quays and the barges on the Seine."