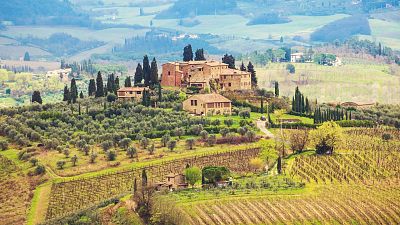 With its rolling hills and sprawling villas, Tuscany is a popular destination for Americans looking to buy second homes   -   Copyright  canva
By Charlotte Elton  •  Updated: 07/09/2022

For thousands of Americans, there’s no place like (a luxury second) home (in Europe).

As the value of the Euro plummets, US buyers are flocking to Europe in search of property.

According to real estate company Knight Frank, searches for French properties by US-based buyers jumped 37 per cent in the first five months of 2022 compared to the same period last year.

Cities across Europe are experiencing “the same trend,” writes Kate Everett-Allen, a partner in residential research at Knight Frank.

“The stalwarts of Paris, Venice and Tuscany are attracting a higher volume of US interest but so too are Mallorca, Sardinia and the South of France,” she says.

Other parts of the continent are experiencing a similar trend.

According to the Portuguese Immigration and Borders Services, the number of Americans living in the country doubled from 3,300 in 2018 to 6,900 in 2021. Under Portugal’s ‘Golden Visa’ program, Americans who buy a property in Portugal need to spend just seven days per year in the country to qualify for citizenship after five years.

Greece is another popular destination. Requests from Americans looking to move there rose by 40 per cent in April-June this year compared to 2021, according to Sotheby’s International Realty.

US citizens are flocking to both urban and rural areas, says Mark Harvey, Knight Frank’s Head of International.

“In the past, US interest has been focused on cities offering culture and connectivity from Rome to Paris and from Barcelona to Florence. But we’re now seeing US buyers target traditional sunbelt areas which is a departure from the norm.”

Why are Americans moving to Europe?

The most significant factor driving American buyers to Europe is the plummeting value of the Euro.

In July, the European currency fell below the value of the American dollar for the first time in 20 years.

The precipitous decline is partly a consequence of the war in the Ukraine and the looming threat of a recession.

“With the Fed tightening monetary policy more aggressively than the Eurozone to combat above-target inflation the dollar is appreciating against the euro,” Everett-Allen writes.

As the values of currencies shift, so does spending power. Americans can get more bang for their buck in Europe than they used to. Europeans get less in the States than in previous years.

The other important factor is the relatively low house prices.

According to Knight Frank Global Residential Index, prices are rising fast in many parts of the States.

Nine of the 20 cities with the fastest rising real estate prices are American. The top three, Phoenix, Miami and San Diego, have seen prices rise 29 per cent or more.

Everett- describes the situation as a “bargain” for would-be American homeowners in Europe.

“Go somewhere else”: How Europeans are reacting to American homebuyers

For many Americans, the chance to move is a dream come true. However, not everyone is happy with the surge of new buyers.

Social media is alight with locals complaining about the attendant increase in house prices.

“Go somewhere else, we’ve got enough home shortage as it is,” wrote twitter user Kaloyan Doynov.

“Only the wealthy can afford this, they drive up the prices for all of us,” declared another user.

In Barcelona - where house prices have increased by 4.3 per cent over the last 12 months - anger against digital nomads has spilled over into protests.

“Your luxury trip, my daily misery,” reads one slogan painted across the city.