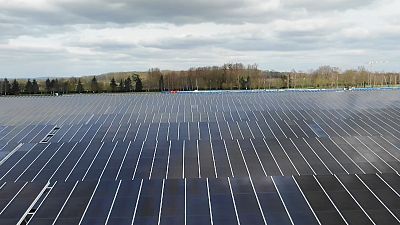 The park is Europe’s number one private tourist destination and has welcomed more than 320 million visitors since its creation in 1992, hailing from across France, the United Kingdom, Spain, Italy, the Netherlands and many more.

Now, it is taking an important step towards an ecological transition.

The main guest parking lot at Disneyland Paris will now host “one of the largest solar canopy plants in Europe,” in collaboration with French company Urbasolar Group.

The plant will cover 17 hectares with 67,500 solar panels, so as to cover up to 9,000 parking places. This is equivalent to almost 24 football fields placed next to one another.

The solar panels have a very low carbon footprint, and are 94 per cent recyclable.

Their production is estimated to be at 31 gigawatts per hour (GWh) per year, which is roughly the same as the consumption of a city of 14,500 inhabitants.

The construction of this giant plant is expected to be fully completed by 2023.

The construction of this giant plant is expected to be fully completed by 2023. 12,000 solar panels have been put in place so far, covering 1,770 parking spots.

What impact will this have on the park’s ecological footprint?

The aim is to reduce CO2 emissions by 750 tons per year. The solar panels will produce renewable energy that will not only account for 17 per cent of the resort’s current electricity consumption, it will also shelter cars from the sun, rain or snow.

This means visitors won't have to worry about their vehicles parked under these environment-friendly installations, and can enjoy the full Disneyland Paris experience.

Another plus? At night, a section of the solar panels plans to light up using LEDs to form the shape of a Mickey mouse’s head in the sky.

It’s like a small town in its own right

Generating 19 tonnes of waste a year, Disneyland is sometimes considered to be a town itself. It’s big enough to be a sort of extra-town in the Paris suburbs.

If you add the 27 hole golf course, seven hotels, two convention centres and a village with multiple shops and restaurants to its already existing 51 attractions, the overall energy consumption doesn't fully apply to the definition of 'ecological sobriety' on many levels.

But it’s not the only park to weigh big in the ecological imbalance. In comparison, the Futuroscope park near Poitiers, west France, produced 10,746 tons of CO2 in 2019 according to its annual review.

Yet, since Disneyland employs about 17,000 cast members when it’s not closed because of COVID-19, the company has taken action to reduce its carbon footprint. This includes planting 35,000 trees and 450,000 shrubs, along with Grandmother Willow, the famous character from Pocahontas.

A long-lasting strategy to protect the environment

The canopy solar plant is part of the environmental strategy conducted in recent years by Disneyland Paris, which has resulted in a series of measures ranging from the elimination of straws and single-use plastics to the creation of a geothermal power plant that produces around 20 gigawatts per hour (GWh).

Did you know that it's also the first European theme park to have its own water treatment station? This is used to water the fountains, basins and green spaces as well as to clean roads and pathways.

Among its sustainability goals the company is aiming to reach by 2030, the focus is laid on five main areas: greenhouse gas emissions, water, waste, materials and sustainable design.

The ultimate aim is to raise awareness and encourage children to protect nature.