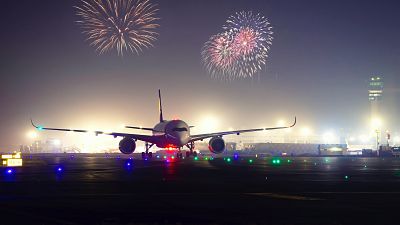 Singapore Airlines has just taken its sonic signature to the next level with the launch of its Batik Symphony, inspired by flowers native to Singapore and the traditional craft of batik fabric dyeing by hand.

This creative acoustic departure is not entirely unprecedented. Who can forget British Airways, which once rode a peak of pop culture popularity on account of its literally breathtakingly spectacular advertisements that used Aria, an electro makeover by Yanni and Malcolm McLaren of the Flower Duet from the 1883 French opera Lakmé, to ramp up its audiovisual footprint. You didn’t have to love the kumbaya subtext of the (admittedly breathtaking) visuals to be utterly entranced by the music, which way back in 1989 sounded like the future.

Fast forward to Singapore Airlines, which recently posted a €3.5 billion net loss after the toughest financial year in its history.

Maybe this new sonic signature is one way to sing its way back from the bad-year blues. The airline tapped UK-based composer Rohan De Livera, along with musician Dominic Murcott and members from the airline's cabin crew and ground staff. They spent several weeks developing the colour frequencies of the flowers of SIA's new batik motif into 14 sets of melodic fragments, which were then used to compose the melodies.

In an introductory video, Murcott says “What I had to do was find ways of extracting new melodies from the flowers.” You can check out the results here.

The inspiration for the main melody is said to be from Singapore Airlines' new batik motif. It's a batik-inspired print with a modern touch, paying homage to the airline's brand heritage as well as Singapore's well-known status as a garden city.

The design draws inspiration from the original batik motif of the iconic cabin crew sarong kebaya, as well as 10 flowers native to Singapore.

Audio branding basically means taking a logo to the next sensory level. According to Max de Lucia of London-based DLMDD, an agency that "builds brands through sound" and that spearheaded the Batik Symphony, told me that, “Travel is typically a quite stressful thing for people. And especially if you’re a frequent flier, it’s the level of that attention to detail from a brand that kind of wins your loyalty as a passenger.” De Lucia says the Batik Symphony was over a year and a half in the making.

The history of sonic signatures

As for airlines’ sonic signatures, United was one of the earliest adopters of audio branding when it began incorporating George Gershwin’s Rhapsody in Blue into its TV ads. The now arguably overfamiliar melody still finds its way into other on-board touch points such as informational flight video content.

If there’s anything that unifies the art of sonic signature-making, whether it’s a low-cost airline with rule-the-world aspirations or a legacy carrier, it is that imperative to be enjoyable without jarring. No easy feat. As groundbreaking as British Airways was in finding the right balance, in marketing materials if not actually on board, there was also Brian Eno’s 1978 album Music for Airports.

Inspired by Eno’s kicking around Cologne-Bonn Airport, it’s one of the most influential examples of ambient music, meant to soothe frayed senses. Airlines certainly don’t want to stir you up as you navigate a cramped aisle on your way to seat 25C, but they also want you to want more of them. The sonic signature is an audible step in that direction.

Yeoh Phee Teik, senior vice president of customer experience at Singapore Airlines, says "We’ve created a new heritage-inspired icon, the Singapore Airlines batik motif, and we used this as inspiration to explore the world of sound.”

The composers and creators tapped by the airline to do this have a talent for hearing sounds when they see colours, which is an example of synaesthesia - when different senses that aren’t normally connected are merged. If technically that’s a bit complex, the end result is, simply put, music to the ears of the airline’s loyal legions of international passengers and best of all, very representative of exotic Singapore itself.