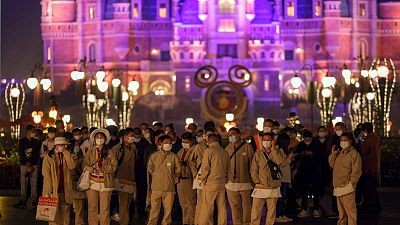 Disneyland employees gather to wait for their COVID-19 tests at the Shanghai resort on Sunday.   -   Copyright  Chinatopix via AP
By Lottie Limb  •  Updated: 02/11/2021

Being stuck in Disneyland might sound like a dream come true to some. But it became a nightmarish reality for those locked down on Halloween after a single COVID-19 case was detected.

The Shanghai branch of the global theme park closed its gates on Sunday evening because a Saturday visitor later tested positive for the virus.

Only healthcare workers in hazmat suits and police were allowed to enter from around 5pm, as almost 34,000 people had to be tested before they could leave Shanghai Disney Resort, in line with China’s zero-tolerance approach to new outbreaks.

Although it meant spending a night in the magic kingdom that no one had bargained for, visitors were quick to praise the efficiency of the testing operation.

Qian, a young woman and Disneyland fan, posted an account of her experience on Weibo. The Chinese microblogging site was where she learnt of the situation from the official account of Shanghai Disney.

“The tourists around me started discussing this matter, but they all finished watching the first fireworks in peace,” she said. The fireworks show went on during the mass testing underway, with everyone made to take a nucleic acid test.

“The response speed and the measures to deal with the epidemic are really fast and reasonable,” Qian wrote. She described how she was prepared to stay until dawn but was surprised by the quick work of the “gentle and patient” medical staff, and glad to see scores of buses (more than 200 according to media reports) arrive to take people home after the rail lines shut.

No cases were detected among Sunday’s Disneyland-goers, but they have had to self-isolate at home for two days and undergo further COVID-19 testing. The theme park is due to re-open tomorrow, Wednesday 3rd November.

One Shanghai man, who decided not to visit the resort on Sunday, commented on the oddness of seeing “nucleic acid detection, protective clothing, party music, and fireworks appearing together” as videos emerged of the scene.

“It took everyone's time and huge cost to detect so many people, but I hope [it ensures] that there are zero infected people among the tens of thousands of people, and zero means everyone is safe,” he said on Facebook.

For Qian, who posed in photos at the castle and with Lina Bell - a popular new fluffy fox character at the resort - “this Halloween will be unforgettable, a happy, beautiful, and wonderful journey with no dangers.”

What is the COVID-19 situation in China?

China has kept its borders shut since March 2020 and shows no signs of giving up its zero-tolerance policy to domestic outbreaks of the virus anytime soon.

Measures have tightened in recent weeks, with cases of the Delta variant detected in 11 provinces, halting marathons and other public events. Last week, health authorities stopped a train that was travelling from Shanghai to Beijing because one passenger was in close contact with someone who had tested positive for the virus, AP reports.

Late last night, a notice on the Ministry of Commerce website urged “families to store a certain amount of daily necessities as needed to meet daily life and emergencies.”

There have been 4,363 deaths from COVID-19 and under 100,000 cases reported in the country since the pandemic began.