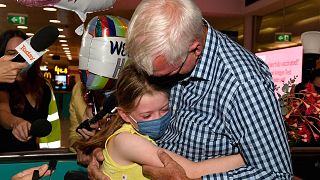 A man hugs his granddaughter upon arriving at Sydney International Airport after Australia reopened its borders for the fully vaccinated   -  Copyright  AFP
By Ben Anthony Horton  with AFP  •  Updated: 21/02/2022

Australia opens its international borders to all vaccinated tourists today, nearly two years after the nation first imposed some of the world's strictest COVID-19 travel restrictions.

A Qantas flight from Los Angeles was the first to touch down in Sydney at 6:20 am local time, followed by arrivals from Tokyo, Vancouver and Singapore.

"It's fair to say we’ve all been waiting a long time to welcome visitors back to Australia," says Alan Joyce, chief executive for Qantas, Australia’s flag carrier.

The airline expects to more bring than 14,000 passengers into Australia this week - the start of what many believe will be a long, slow recovery for a tourism sector devastated by the coronavirus pandemic.

“Tourism Australia has been doing a lot of work to make sure that we will be ready to encourage [...] visitors to come."

Only 56 international flights are scheduled to land in Australia in the next 24 hours - far below pre-pandemic levels - but Prime Minister Scott Morrison says he has "no doubt" the number will scale up in time.

Australia closed its borders to everyone except citizens and residents in March 2020 in an attempt to slow surging COVID-19 case numbers.

The travel ban, which barred citizens from travelling overseas without an exemption and imposed a strict cap on international arrivals, earned the country the nickname ‘Fortress Australia’.

Every month, these policies cost businesses an estimated €2.3 billion, according to the Australian Chamber of Commerce and Industry.

Tony Walker, managing director of the Quicksilver Group - which operates cruises, diving excursions and resorts across the Great Barrier Reef - says he is "very excited about being able to re-open.”

International tourists "make up around 70 per cent" of business for tourism operators on the reef, says Walker, which made the two-year border closure "incredibly difficult.”

During the pandemic, his company had to reduce its workforce from 650 to 300 employees.

Scott Morrison acknowledged this on Sunday, saying that tourism had "really borne the brunt of this COVID pandemic.”

"It's been tough, but Australia is pushing through," he added, defending his own decision to shut the country's borders to the world for two years.

“It was incredibly important and helped us achieve in this country what few others could: one of the lowest rates of death of Covid in the world."

Western Australia, meanwhile, will not re-open to international travellers until 3 March 2022.