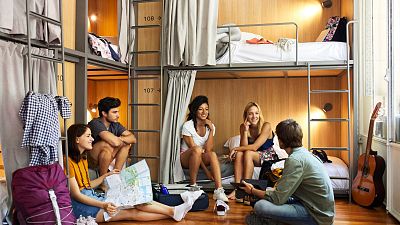 Looking for an ethical accomodation option for your next holiday? Try these five alternatives to Airbnb.   -   Copyright  Morsa Images / Canva
By Charlotte Elton  •  Updated: 30/08/2022

TUI and Airbnb scored poorly, losing out to ethical alternatives such as Canopy & Stars and Fairbnb. As a result, the alternative consumer organisation is asking people to think twice before booking with some popular services.

Why did AirBnb and TUI rank so poorly?

The report criticised Airbnb for failing to engage with the local community.

“While Airbnb at first seemed to be an exciting new way to make a bit of extra money from a spare room, and for some hosts it still is, less than 10 per cent of listings are actually of this type,” claimed lead researcher Ruth Strange.

“Most are from people who own more than one property, and may even be managed by a specialised company.”

The report encourages Airbnb users to research ‘genuine’ hosts, checking how many listings they have to avoid career hosts.

TUI ranked last in the ethical rankings. Because of the organisation’s large size, it is subjected to investigations like the UK Modern Slavery Act report - an assessment that Strange indicated the company could improve on.

“By 2018 TUI was still only scoring 39 per cent in this assessment and failing to show the leadership necessary to help lift standards at an industry level,” she said.

TUI also had points deducted for selling trips to animal parks holding orcas and its involvement in deportation flights up to 2021. Until last year, the company flew deportation charter flights on behalf of the Home Office, transporting migrants back to countries after they attempted to enter the UK.

From an environmental perspective, the report criticises TUI - along with booking.com and Expedia - for failing to annually report on their emissions.

Euronews has reached out to Airbnb and TUI for comment.

So, if you’re looking to holiday with a clear conscience, here are some of the companies you should try.

What are the ethical alternatives to big travel companies?

You don’t need to feel guilty when you book a holiday, however - there are plenty of ethical options.

Fairbnb’s mission is “to create a just alternative to existing home-sharing platforms.”

Founded in 2016 in Italy and Amsterdam, it now boasts members in more than nine European countries.

The organisation is collectively owned and splits its 15 per cent commission fees 50/50 with local community projects.

The platform also screens hosts “according to destination specific rules.”

“In specific areas, we promote the one host – one house rule: lawful hosts, preferably residents, with only one second home on the touristic market in their city,” the Fairbnb website states.

“It’s our way to promote a more sustainable, genuine and authentic tourism.”

According to the Ethical Consumer report, the company received the best possible rating for carbon management.

2. For a positive relationship between travel and the environment: Canopy & Stars

Canopy & Stars is a small, employee-owned company offering glamping trips in the UK.

The company has founded a charitable trust - that owns nearly a quarter of the business - which donates money to environmental causes.

“We believe that a positive relationship between travel and the environment is possible,” their website reads.

“We also believe that companies should contribute to the communities they are based in and have an effect on.”

If you’re looking for an eco holiday option that won’t break the bank, this could be a good option. Not all of the hostels listed by IHUK are environmentally friendly - but the guide allows users to search specifically for eco-hostels and bunkhouses.

A quarter of listed hostels have a ‘green ethos,’ according to the organisation - and many have signed up for the Green Tourism Business Scheme.

4. For a more local experience: BeWelcome

Members of the not-for-profit community can offer a place to stay, or provide dinner, a guided tour, local information, or just meet up for a coffee or a beer.

“At BeWelcome we believe sharing creates a better world,” their website exclaims.

Trustroots is a non-profit 'travellers community' with more than 70,000 members.

It lists almost 50 ‘circles,’ including cyclists, hackers and buskers, so you can find like minded members to meet while travelling, host each other and make friends. Users put up profiles and find each other via the online platform.

“Our willingness to help each other is universal. Trustroots is completely free to use and will remain so forever,” their manifesto promises.