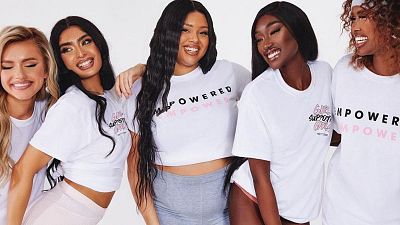 Pretty Little Thing is selling t-shirts related to women's empowerment, while its parent company is under investigation for modern slavery.   -   Copyright  Pretty Little Thing / Twitter
The opinions expressed in this article are those of the author and do not represent in any way the editorial position of Euronews.
By Frankie Leach  •  Updated: 14/06/2021

International Women’s Day is a day for celebration, one where women across the world come together to celebrate themselves and each other, in the face of continuing oppression and struggle. The date for IWD (8 March) is specifically chosen to mark the day women textile workers in Russia who went on strike for "bread and peace" in 1917.

We all know that International Women’s Day always ends up being a mixture of women on panels talking about hard-hitting topics like FGM, domestic abuse and transphobia to name a few. But it can also be littered with emails throughout the day from brands giving you a 10 per cent discount using the code #womenrock. Or tweets like this from Burger King which shouldn’t have ever made it past the initial brainstorm.

The choice for brands is difficult, do they positively engage with International Women’s Day or only put their necks out if they have something meaningful to say?

I’d always recommend the latter, it’s important to celebrate women but as a brand in a powerful position it’s also key that you put your money where your mouth is (so to speak, and do something that will actually inspire change).

So when Pretty Little Thing today announced it was going to be selling t-shirts with slogans such as “girls supporting girls” and “empowered” emblazoned across them, it immediately raised suspicions. PLT claimed 100 per cent of the proceeds from these t-shirts will be donated to their partner, Girls Inc (an excellent charity!) as part of an IWD campaign.

The t-shirts are being sold for £10, which is just over the £8.72 UK minimum wage. However, Pretty Little Thing (of the Boohoo family) are already under fire for links to garment workers who are being paid poverty wages and facing horrendous working conditions right here in the UK.

Publicity stunts on International Women’s Day are an insult to the women they continually exploit.

For a brand like Pretty Little Thing, publicity stunts on International Women’s Day are an insult to the women they continually exploit to produce clothing like these “feminist” t-shirts. The real feminist thing to do on International Women’s Day is to commit to an audit of their supply chains, make a commitment to the government to be transparent about their garment producing factories and overhaul their production and sales model to stop over-producing garments made from non-degradable plastics that are destined for landfill.

But it’s not only Pretty Little Thing and the Boohoo family that are guilty of this co-option of International Women’s Day.

Just one month ago, a 20-year-old garment worker at an H&M supplier factory in Tamil Nadu was allegedly murdered by her supervisor after several months of sexual harassment. It resulted in a boycott movement against the brand and H&M is left facing some big questions about the safety of their female workers in factories across the world.

On previous International Women’s Days, H&M has offered discounts across the site, but one wonders what would happen if instead the company offered a financial contribution to the murdered woman’s family of a similar size to the profits they make from discount codes.

Women make up the majority of garment workers globally. They often work in the lowest paid positions & risk sexual & other harassment by superiors. But they also stand up for themselves & demand what they're owed. Women workers & women in solidarity urge brands #PayYourWorkers! pic.twitter.com/2lAo0nojMX

According to the UNHC, the COVID-19 pandemic is worsening gender inequalities for refugee women and girls, which is why now more than ever before it is vital that fast fashion brands use their power and wealth to enact real change for women across the world.

Fast fashion brands are only functioning through the ability to profit off the exploitation of women.

Fast fashion brands across the world are using IWD to greenwash their sins - presenting themselves as progressive and thoughtful when in reality they are only functioning through the ability to profit off the exploitation of women.

Selling dresses for £4 is only possible through the underpayment of the workers creating those garments, and it’s this kind of exploitation that International Women’s Day was created to challenge and defeat.

Whether it’s garment workers making their clothes, or warehouse workers packaging the orders - women suffer at the hands of these companies 365 days a year. And a recycled plastic t-shirt on International Women’s day is never going to change that.

Fast fashion is a feminist issue, every day of the year.

A spokesperson for Boohoo replied to this article, saying: “The Boohoo Group has always promoted the individuality and power of women. The group absolutely refutes the suggestion that it exploits workers, the Group’s Supplier Code of Conduct has very clear expectations on pay and conditions that factory owners must abide by.

“When allegations about issues in the supply chain were raised in July 2020 the Group immediately appointed Alison Levitt QC to conduct a thorough independent review. The Group accepted Ms Levitt’s recommendations in full and has been working tirelessly over the last 7 months to drive long term sustainable change. Over 400 audits have been completed and as result the Group have consolidated its supply chain, removing suppliers who do not share the Group’s values of transparency and compliance.

“In September, we committed to publishing a full list of UK manufacturers and this will happen before the end of this month. The Group’s test and repeat model ensures that unlike many traditional retailers who have large retail estates to fill, we only produce what we need, which reduces waste and environmental impact.”

This article has been amended to include a comment from the Boohoo Group.

Euronews Green contacted H&M for a right of reply, but no comment has been offered.

This article was originally published on International Women's Day 2021.