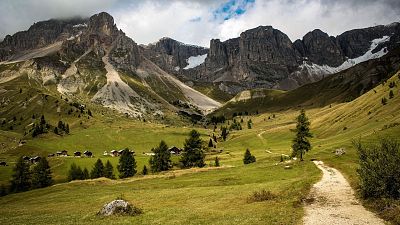 Italy's Apennine mountains are home to a range of endangered species   -   Copyright  courtesy of Exodus Travel
By Shannon McDonagh  •  Updated: 05/05/2021

Italy’s largest mountain range is the latest focus of an ambitious “nature corridors” project aimed at elevating the area’s biodiversity.

The project, based across 5,000 hectares in the Apennines, is a result of a new partnership between travel company Exodus Travels and Rewilding Europe that hopes to stimulate the area’s endangered bear population.

Rewilding 100 square metres of land for every passenger that adventures with Exodus into the mountains will ensure that almost a quarter of the area is covered in five years.

Letting the spaces evolve and grow in their own way will support the creation of five nature corridors that promote both greater biodiversity and capture more carbon in the region, as much as 85,000 tonnes to be exact.

The mountain range is popular with adventurers and is one of Italy’s highest elevation points for tourists to explore.

The company recognises that “there is an urgent climate emergency and is committed to becoming an advocate within the travel industry for protecting and restoring the planet.”

These nature corridors will enable the endangered Marsican bear population to spread between protected lands, giving them a higher chance of repopulation. Marsican bears have been declared extinct across Central Europe and there are only 50-60 alive in this region at this moment, according to the BBC.

Bears aren’t the only animal species to benefit from this new development. Rewilding Europe says the project will do wonders for the recovery of Italian wolf, wild cat, and other small animal populations.

Rewilding has been cited as the newest, progressive means of getting natural spaces back to their former glory. Other exciting developments in Rewilding Europe’s portfolio include Portugal’s Greater Coa Valley and Romania’s Southern Carpathians.

The Apennines has a long history of environmental welfare

Situated just one and a half hours from Rome, the Apeninnes’ endless sprawl of beech trees and animal habitats are known as one of Italy’s “biodiversity hotspots”.

Its forests have been the subject of damaging levels of degradation compromised by the construction of an underground nuclear power center, as reported by the World Wildlife Fund (WWF).

Fortunately, the mountains are known by conservationists to have successfully preserved ecosystems threatened by human intervention with the help of several environmental initiatives.