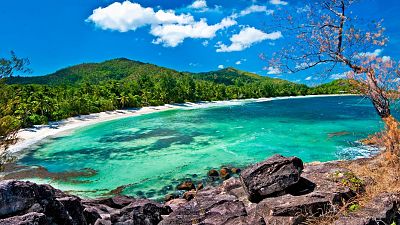 When you think of the tropical island of the Seychelles, you're likely to think - sun soaked bliss. Unspoiled beaches and swathes of tropical rainforests make up 115 different islands dotted around the Indian Ocean.

Alphonse Island (or Ile Alphonse, as it is known by locals) is home to some of the archipelago's most desirable holiday options. It is discreetly tucked hundreds of miles away from the capital of Victoria and houses a little over 100 people that are employed by its hotel, conservation projects, or the small runway that gets you there in the first place.

Its tiny size makes it easily missable to those none the wiser, but Alphonse is definitely not one to forget when it comes to future post-COVID travel planning. Especially because of the work its sole hotel - run by Blue Safari - is doing to make it a real frontrunner in sustainable luxury travel.

Alphonse encapsulates everything an eco-conscious traveller could dream of. Each part of the island’s ecotourism culture honours some form of environmentally-friendly practice that only adds to the overall holiday experience.

Guests contribute to the island's wellbeing before they've even stepped foot on it due to a €20 "conservation contribution" added to the bill of each person's stay.

Guests contribute to the island's wellbeing before they've even stepped foot on it due to a €20 'conservation contribution'.

From food to solar farms, Alphonse Island really has thought of everything. Here’s what you can expect from a visit to its sandy shores.

A solar hub of the Seychelles' island cluster

It is home to the Seychelles’ largest solar farm, composed of over 2,000 panels. It is proudly labelled the first island in the region to rely on solar power and receives high energy yields due to its sunny climate that saves hundreds of tonnes of emissions per year.

It sets a great example about just how manageable operating off clean energy is for islands of a similar scope.

Staying far away from plastics

Visitors are advised not to bring and single-use plastic items with them on their travels because the island offers plenty of useful alternatives such as water refill stations. In the event that plastic cling film is needed for food purposes, the island’s business uses biodegradable materials that break down over the course of 12 months.

The resort chooses to offer guests organic, handmade toiletries and beauty products from Belliche - a Seychellois brand that is cruelty and plastic-free.

Alphonse Island is reliant on a vegetable garden that produces 2.5 tonnes of fresh produce each month. A handy, tasty way to fight the war on food waste.

The garden’s success reached new heights last year, culminating in the prevention of 30 tonnes of CO2 from being released into the atmosphere in potential imported air miles alone.

Holidaying across the world can be risky when you're a vegetarian or vegan - you never quite know what to expect. Here, the process is made simple and delicious.

Chefs on the island curate menus for tourists centred around its homegrown fruits, vegetables and herbs such as lemongrass and basil. Guests can tour the gardens and enjoy a smoothie made from their selected goods at the end of it.

Unlike many other sea-situated resorts, shellfish is not imported commercially as eateries and tradesmen opt to fish in their own local waters. Any food waste is recycled into the island’s composting machines that keep their soil nutritious.

Tourists are encouraged to make nature part of their stay

Snorkelling, scuba diving, turtle hatching, fly fishing and bird watching are offered to visitors in a way that allows them to engage in their natural surroundings without harming them.

Conservation has been a longstanding theme of island living here in Alphonse - it first opened a centre dedicated to the preservation of its animal and plant life back in 2007.

This summer, the island is inviting guests to learn more about its ecology with the Explorer Season Conservation Experience. It runs from May to September and will offer tourists a wealth of information and experiences curated by Alphonse’s team of marine biologists and conservationists.

Those lucky enough to fly to the island during that period will get to participate in turtle monitoring, wildlife photography and beach clean-up excavations.