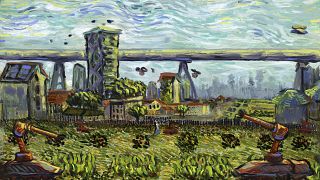 Ever wondered what classic works of art would look like with robots in the foreground? Perhaps not - but we promise it's worth a look.

Famous paintings have been reimagined in a futuristic net-zero world to showcase the merits of engineering.

A new digital art exhibition has been unveiled by the Royal Academy of Engineering in celebration of 'This is Engineering Day.'

The exhibition features famous works of art from the 18th and 19th centuries, recontextualised to showcase the impressive tech needed for us to reach net-zero.

Which artists' works are featured and why?

Pieces by world-renowned artists including Constable, Monet, Pissarro and Van Gogh are included in the collection.

These four artists all entered the art world in the midst of an industrial revolution.

While technological advancements transformed the quality of living throughout the late 18th and early 19th centuries, this progress also kick-started the steady rise of carbon emissions leading to what we now know as the cause of global warming and environmental destruction.

The Royal Academy of Engineering hopes to inspire a new generation of environmental and technological change.

The reworked creations reveal a utopian landscape that could be achieved through the development of engineering.

The first piece of the collection features the smoggy skyline of Clichy painted by Vincent Van Gogh. The digital rendering replaces the stone factories with glass-roofed buildings and towers higher than the billowing smoke seen in the original work.

Sophie Harker, Assistant Chief Engineer of Electric Products at BAE Systems believes this 2050 painter would capture a wide variety of electric vehicles spanning across the view of Clichy.

"Heavy lift flying drones could also be used for transportation of goods or for emergency response," says Harker.

The net-zero carbon sky is a crystal clear blue that shines over the 'autonomous agbots,' a form of agricultural robotics we expect to see in the near future as developers continue to investigate precision farming which they hope can significantly reduce agricultural carbon emissions.

We also see a 'hyper-loop,' an electrically powered pod system that could transform how public transport is integrated into our landscape.

John Constable's Wheat Field depicts a valley in his hometown of Suffolk. The painting, completed in 1816, captures farmhands, ploughmen and reapers harvesting bounties of wheat from the plains.

The planes seen deep in the horizon have been reshaped to maximise fuel efficiency and operate on hydrogen which promises an environmentally conscious form of travel.

"If Constable were to walk in the British countryside in 2050, he’d see smaller fields with strips of different coloured crops, and less productive fields rewilded with trees, wildflowers and shrubs to boost biodiversity and pollination," explains Kit Franklin, a senior lecturer in agriculture engineering at Harper Adams University.

The Seashore at Sainte-Adresse by Claude Monet captures the shoreline in the affluent city of Le Havre, Normandy.

At the time of painting, this area was undergoing a dramatic transformation from a traditional fishing village to a developed city that is seen in the depths of the horizon with factories billowing smoke into the city.

Monet's series of paintings from Sainte-Adresse reveal the contrasts of a bourgeoisie industrial revolution and the simpler tools of workmen across the nautical backdrop.

Professor Susan Gourvenec, of the University of Southampton, worked with the digital artists on this project to help accurately imagine Sainte-Adresse in 2050. Gourvenec specialises in emerging technologies in the field of ocean resilience engineering.

"If Monet was to paint The Seashore at Sainte-Adresse in 2050, his famous seascape might feature offshore energy farms generating renewable energy through wind turbines or tidal power," says Professor Gourvenec.

"This could be used to power homes or produce green hydrogen, and to refuel ocean-going cargo vessels offshore.

"Closer to the shore, seagrass plantations might be visible, which would not only capture carbon but also provide coastal protection and improve the coastal ecosystem and habitat for wildlife."

The building seen added along the left-hand side of the painting uses thermochromic windows which generate solar power and cool down the house to reduce carbon emissions and maximise the efficiency of the space.

Camille Pissarro's Rue Saint-Honoré captures the famous Parisian road in the late 19th century under a shower of afternoon rain. The street is busy, with carriages lining the buildings and bundles of pedestrians dotted in between.

The series launches the viewer into a Parisian depiction of 2050, with revolutionised transport systems including an electric monorail, vertical taxi station and underground metro links.

"If Pissarro were to travel to Paris in 2050, he might find buildings that have been designed to take full advantage of their environment," says Professor Chris Wise RDI FREng, Founder Partner of Expedition.

“As we see increased rainfall and flooding in the future, cities will have replaced concrete pavements with more permeable materials and greenery.”

The works are also available to view online via Google Arts and Culture.