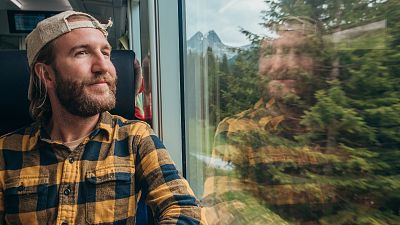 In an effort to champion the positive green impact of rail travel in the UK, explorer and presenter Simon Reeve is backing a National Rail campaign to appoint three ‘Chief Environment Officers’ from among the public.

Their job? Simply to ride Britain’s rails, seek out the most beautiful routes and highlight the best destinations in the UK that can be reached by train. Each of the successful applicants will be given almost €12,000 to undertake their mission of testing out 10 journeys over 16 days.

Launched on Earth Day (22 April), the competition is intended to confront confusion around the most climate-friendly ways to travel. New research conducted by Rail Delivery Group found that almost half of Brits (46 per cent) are unaware that travelling by train is the most sustainable mode of transport.

Some 13 per cent said they thought cars or planes are better for the environment.

46% of Brits are unaware that travelling by train is the most sustainable mode of transport.

“Choosing to travel by train instead of driving cuts carbon emissions by two thirds, making it a better choice for the environment,” says presenter Simon Reeve, who has explored the world for TV programmes including 'Incredible Journeys with Simon Reeve' and 'Mediterranean with Simon Reeve'.

“Rail can connect you to lots of fantastic destinations across Britain, from Buxton in the Peak District to Okehampton in Devon.”

The Chief Environment Officer competition runs until midnight on 1 May 2022 and you can apply here.

Applicants must submit a 60-second video of a recent trip, explaining why sustainability is so important to them.

Applicants must submit a 60-second video of a recent trip, explaining why sustainability is so important to them.

The videos will be judged by a panel that includes Simon Reeve, as well as travel vloggers Chloe Wanderlust and An Adventurous World. The winners will be announced on 12 May.

How is the UK championing rail travel?

The campaign has launched in the midst of the ‘Great British Rail Sale’, which is slashing up to 50 per cent off more than 1 million advance rail tickets in the UK until 2 May.

The sale represents a huge national push to aid recovery in the UK rail industry, which has faced significant challenges since the pandemic.

However, as UK consumers become more conscious of the environmental impact of their travel decisions, there has been growing anger over the costs of domestic rail travel.

The UK has some of the most expensive train fares in Europe.

For those who don’t believe it ?? pic.twitter.com/B0NXCRfJJw