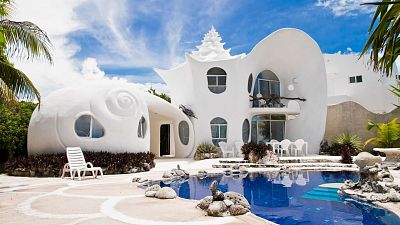 After seeing the same four walls for much of 2020, most of us are keener than ever to stay somewhere a little out of the ordinary

Searches for 'different types of AirBnb' have been up 400 per cent in the past 12 months, according to Google.

From bottled walls to former shipping containers, here are some of the world's weirdest AirBnbs, according to Confused.com.

Drift off in a bubble in Mexico

Forget social bubbles, in this glass bubble in Valle de Guadalupe, Mexico's famous wine country, you can go glamping with uninterrupted views of the sky as you fall asleep, potentially with a bottle of wine by your side. The Bubble Suite is just one of a whole range of bubble buildings you can float away in.

Have a swinging time in Hawaii

Treehouses aren’t just for kids. You might need adult bravery though as this cabin is 4.5 metres off the ground. Offering 360-degree views of a tropical jungle, Dreamy Tropical House, Hawaii is the ultimate spot for wannabe Tarzan and Janes or those of us who just want to drop off the grid for a while.

Listen to the sound of the sea in Mexico

Unlike the other shells you might find on a beach, you won’t be washed away by the sea in these two giant seashells. Set on the Mexican island of Isla Mujeres in the Caribbean Sea, the Seashell House was designed by two beach-loving artists in the early 1990s.

Be King of the castle in Ireland

Step back in time and live like a King in your own medieval Castle in Galway. Cahercastle has been standing since the late 1400s but has been restored to its original state using traditional materials and cutting-edge technology.

Brush past cobwebs and climb the winding staircases to reach your accommodation in the top two floors of this Irish castle.

Chill out in Finland

It may be rebuilt every year but the Snow Igloo in Pelkosenniemi, Finland, while cold on the outside is cosy on the inside, Sleeping two on its ice bed, it comes with an apartment for up to four friends to stay in. So if it’s a true taste of nature you want, wrap up warm and bunker down in this 'cool' holiday pad that's just around the corner from Lapland.

Bottle your dreams in Brazil

With its walls made from recycled bottles, stained glass windows and repurposed furniture, this eco-residence in Florianopolis, Santa Catarina, is a one-of-a-kind hideaway.

Cabana Floripa is the highest house on the hill with 360-degree views thanks to its bottle walls. If you are interested in recycling, nature and art this is the house for you.

Being square in the Netherlands

You will feel like you're staying in a piece of modern art at the Iconic Cube House. But don't be square. Located in the centre of Rotterdam’s bustling social scene you're just a few steps from the Markthal, the Old Harbor, and lots of restaurants.

Enjoy your very own private island

This tiny island in Belize sits right in the middle of a stunning atoll, a type of coral reef packed with underwater wildlife of all shapes and sizes.

At Bird Island, you can snorkel, wade in sand flats, go fishing, or take a tour to the main Belize Reef (Silk Caye). You will have the entire island all to yourself as there is no staff on the island, making it the only truly private island in Belize.

Curl up in a tiny former shipping container in Texas

This unique home started as a six-meter shipping container and offers enough space for two people to sit, eat, sleep and not much else. But climb up to the roof garden and you can enjoy the Texas night sky in all its glory.

The minuscule floorspace of the Yellow and Blue Container House in Waco, Texas also makes it easier to clean when you leave.

I couldn't help but wonder, can I stay in Carrie Bradshaw's apartment?

Meet the digital nomad who's been living in Airbnbs for years