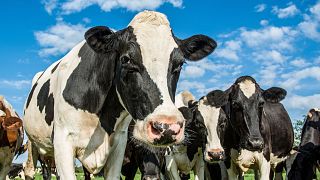 Launched in 2021, the Plant Based Treaty is a grassroots campaign which aims to put food systems at the forefront of tackling climate change.   -  Copyright  Canva
By Charlotte Elton  •  Updated: 18/01/2023

Scotland is famous for its meaty national dish, a ‘haggis’ sheep offal pudding.

But could this iconic meal one day be phased out for a veggie alternative?

Edinburgh has become the first European capital to endorse a plant-based diet to tackle the climate emergency.

The city council has signed on to the Plant Based Treaty, an initiative which aims to reduce greenhouse gas emissions from animal agriculture.

The treaty could eventually see the council introduce some carbon labelling on menus and transition to more plant based meals in schools and council buildings.

Green councillor Steve Burgess - who initially introduced the treaty to the authority - described the move as a “fantastic opportunity.”

“By declaring our endorsement, we are acknowledging that food systems are a main driver of the climate emergency and that a shift towards plant-based diets can go a huge way in reducing greenhouse gas emissions,” he said.

“Plant-rich diets are also a ‘win-win-win’ for society: they have a lower environmental impact, significant health benefits, and reduce animal welfare impacts.”

How bad are meat and dairy for the planet?

Emissions from meat and dairy are huge drivers of climate change.

Farming cows, pigs and chickens for food - and cultivating the feedstock required to sustain them - accounts for 57 per cent of this total.

This disproportionate share stems from the high carbon intensity of meat and dairy production.

In their Sixth Carbon Budget report published in 2020, the UK Climate Change Committee recommended a 20-50 per cent reduction in all meat and dairy consumption by 2050.

Meat production is also the single biggest cause of deforestation globally.

What is the Plant Based Treaty?

Launched in 2021, the Plant Based Treaty is a grassroots campaign which aims to put food systems at the forefront of tackling climate change.

Endorsing the campaign is a similar move to declaring a climate emergency. While it is not legally binding, it is an admission that ‘business as usual’ will result in planetary disaster.

The treaty has been endorsed by 20 municipal governments around the world, from Haywards Heath town in West Sussex to Los Angeles.

Other promises include reforestation, meat taxes, and carbon labelling mandates on food.

What will the Plant Based Treaty mean for Edinburgh?

The treaty likely won’t mean the end of the haggis. But it could lead to a number of pro-plant based initiatives.

These could include introducing carbon labelling to food menus in schools and a “clearer pathway for fully transitioning to plant-based meals … for example beginning with meat free days in other Council buildings such as offices,” according to the council’s assessment report of the treaty.

Given that 12 per cent of Edinburgh’s consumption based footprint comes from the consumption of meat, this has the potential to reduce carbon emissions.