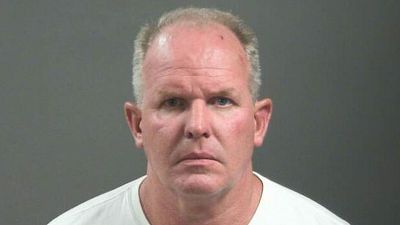 Human noses are not vegan, according to one Twitter user. But some speculate Doug Ramsey isn't clear on this.

Ramsey - the Chief Operating Officer at vegan food giant Beyond Meat - was arrested for biting a man’s nose on Saturday.

The 53-year-old has been charged with ‘terroristic threatening' and third degree battery after a road rage incident in Arkansas, USA.

According to local news organisation KNWA, the incident occurred when a car tried to edge in front of Mr Ramsey’s vehicle, clipping the front tyre.

Ramsey allegedly exited his SUV, “pulled [the other driver] in close and punched his body,” then “bit the owner’s nose, ripping the flesh on the tip of the nose.”

The 53-year-old is relatively new to the plant-based food industry, having joined in December 2021 after working for Tyson Foods, a multinational beef and chicken exporter.

What is Beyond Meat - and is it good for the planet?

Beyond Meat produces plant-based meat substitutes that taste, cook and look like meat.

They have a far smaller carbon footprint than beef, cutting greenhouse gas emissions by around 90 per cent.

Compared to a beef burger, a Beyond Meat burger reduces land use by 93 per cent and water use by 90 per cent.

The patties aren’t environmentally perfect. Their main ingredient is peas, which is grown as a monoculture crop, contributing to soil degradation and increasing pesticide use. However, most meat alternatives rely on monoculture crops too, grown for animal feed.

Beyond Meat is one of the biggest purveyors of ‘fake meat’ in the world - but the market is increasingly crowded as plant-based food goes mainstream.

Fast food chains like Burger King and McDonalds have released ‘meatless meat’ offerings, and patties and sausages are available in supermarkets around the world.

However, Beyond Meat has had a difficult year, as people turn to cheaper alternatives amidst the cost of living crisis.

Since the start of 2022, the value of its shares have dropped by more than 70 per cent.