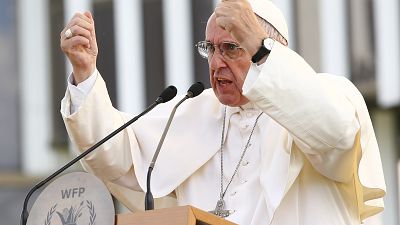 Pope Francis has asked young people to eat less meat in a bid to take better care of the environment.

In a letter to participants at the EU Youth Conference in Prague earlier this month, the Pope urged that we “break this self-destructive trend” of consumerism and prioritise sustainability.

“It is urgent to reduce consumption not only of fossil fuels but also of many superfluous things; and also, in certain areas of the world, it is convenient to consume less meat, this can also help save the environment,” he wrote.

The Pope is clearly worried about climate change

The latest green pledge follows the Pope’s publication of 'Laudato si' in 2015, his second encyclical (letter) which laments environmental degradation and global warming, and calls all people of the world to take "swift and unified global action."

He lays the foundations for what he calls “integral ecology” in the encyclical. This earned him the title of Person of the Year by People for the Ethical Treatment of Animals (PETA) the same year.

In October 2021, Pope Francis and religious leaders called for action on climate change at the UN COP26 conference. Although the 84-year-old could not attend the conference, he made his dedication to tackling the climate crisis clear.

Then in November, he made another speech telling us all to protect the environment as “everything around us seems to be collapsing”. The Vatican's St. Peter's Basilica was filled to the brim with hundreds of young people who came to listen.

"Be free and authentic, be the critical conscience of society," Francis said.

Is the Pope vegan?

The Pope himself is not a vegetarian, but favours a very simple diet, according to a much-quoted article in USA Today.

The article from 2013 reports that one of his favourite meals is the raw vegetable dish ‘bagna cauda’, which is made from garlic and anchovies. He has not said any more about his diet since then, but that hasn’t stopped the speculation.

In 2019, then 12-year-old animal rights activist Genesis Butler challenged Pope Francis to adopt a vegan lifestyle for Lent, when Christians traditionally make sacrifices for the 40 days leading up to Easter. This would have meant the Pope forgoing animal-based foods and products.

With the help of nonprofit Million Dollar Vegan, Butler even offered to give $1 million (€998,300) to the charity of his choice if he gave it a try.

Unfortunately, the Pope did not take up the offer - but he did thank Butler with a letter she shared with the public.

"He appreciates the concerns about care for the world, our common home, which prompted you to write to him.

"The Holy Father will remember you in his prayers, and he sends you his blessing,” the letter said.

Pope apologises for 'evil' abuse at Indigenous schools in Canada