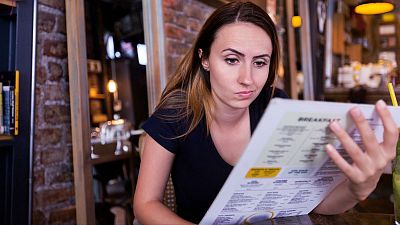 Calorie counting is unhealthy, but adding carbon to menus could really make a difference argues Hope Brotherton.   -   Copyright  Getty/ilkersener
The opinions expressed in this article are those of the author and do not represent in any way the editorial position of Euronews.
By Hope Brotherton  •  Updated: 31/07/2022

A new law designed to decrease obesity came into force in England this year. Since April, businesses with more than 250 employees are legally required by the government to publish calorie information on their menus.

The rule covers cafes, restaurants and takeaways. While several well-known chains such as Wetherspoons and McDonald’s already published this information, the guidance was new for many types of eateries across the country.

Even before the law came into force, the move proved to be controversial. The change was met with much resistance from charities, campaigners and celebrities alike.

A number of concerns were put on the table including the deepening financial pressure on restaurateurs, after a difficult two years’ of business during the pandemic.

But there was one more pressing concern at the forefront of campaigners’ minds: how calories on menus would impact those living with eating disorders.

The cost of calories on menus

According to the UK’s leading eating disorder charity Beat, an estimated 1.25 million people live with an eating disorder in the UK. As such, adding calorie information onto menus will impact the health and wellbeing of millions.

Though a survey conducted by Public Health England found that 79 per cent of respondents believed that menus should include calorie information, the impact of the legislation has campaigners worried - and with good reason.

Tom Quinn, a campaigner at Beat, told the Press Association that calories on menus can “increase a fixation on restricting calories for those with anorexia or bulimia, or increase feelings of guilt for those with binge-eating disorder.”

Speaking from personal experience, I’ve had countless conversations with friends, family members and colleagues about these menus and how they’ve altered our dining experiences over the last few months.

During these discussions, the majority of my friends felt able to ignore the calorie information placed on menus. However, a small handful weren’t so confident.

Most of my meals were dictated by the number dotted below the meal’s description.

As evidence suggests, a large proportion of the population will be able to grab a burger on the go or dine out on rich food. They’re able to view this as a treat with little thought spared about the calories they’ve consumed. If you’re able to eat guilt free, then I applaud you.

However, for myself and others, this isn’t a possibility. When calorie information on menus was introduced three months ago, choosing a meal out no longer became a preference, or a choice. Instead most of my meals were dictated by the number dotted below the meal’s description.

A tiny number, which should be inconsequential, rapidly altered my choice of meal.

Why was the UK calorie law introduced?

The controversial measure came about as part of the government’s strategy to tackle obesity rates in the UK.

In a bid to lower obesity rates, and ease pressure on the NHS, the government believed calorie information would “ensure people are able to make more informed, healthier choices when it comes to eating food out or ordering takeaways.”

Calorie information, however, is just one part of the food story.

In order to make genuinely healthier food choices, nutritional information should be published alongside calorie counts for these metrics to be of any benefit. Yet this still defeats the purpose of dining out or ordering a takeaway. For large swathes of the population, these actions are treats.

Information that would be more beneficial to consumers is the carbon impact of each meal.

One high street restaurant is leading the way

Earlier this year, when chains across England were overhauling their menus, Wahaca (a Mexican-style street food chain) went one step further. It took the plunge and added carbon information to its menus.

In northern Europe, the average carbon footprint of a lunch or dinner is estimated to be 1.7kg CO2e (carbon dioxide equivalent) per dish. That’s a far cry from the 0.5kg CO2e our dishes should be below in order to reach the UN’s 2030 sustainability goal.

It’s a target we can only achieve with more awareness and understanding of the carbon impacts our food choices have. Across the globe, food is responsible for 28 per cent of global carbon emissions.

To calculate the carbon impact each of its meals contains, Wahaca has partnered with Swedish start-up called Klimato. Together they’ve calculated the environmental impacts of each dish. This includes the production and distribution of every ingredient including farming, processing and transportation.

Wahaca, founded by food waste campaigner Thomasina Miers, is right to give its customers this information too.

What impact does carbon information have on diners?

A recent study conducted by the University of Würzburg in Germany found that diners opted for more eco-friendly meals when the carbon footprint of each meal was provided. The researchers were specifically looking to understand how restaurants can contribute to climate change mitigation.

When meals with the lowest carbon footprint and greenhouse gas emissions were set as a default option, the majority of diners picked greener meals. These findings suggest that the publication of carbon indicators may help businesses and consumers to reduce emissions.

By contrast, there is no concrete evidence to date which suggests that calorie information on menus has helped to tackle obesity rates in England.

Even if there’s just a slim chance that carbon impact information on menus will help customers to make more informed climate choices, then the move should be considered in earnest.

In a month where we’ve seen record-breaking temperatures across the UK and Europe, the effects of climate change are becoming all too real.

Even if there’s just a slim chance that carbon impact information on menus will help customers to make more informed climate choices, then the move should be considered in earnest.

We know the actions of one consumer won’t alter the course of climate change but the collective knowledge, power and action of many customers just might.